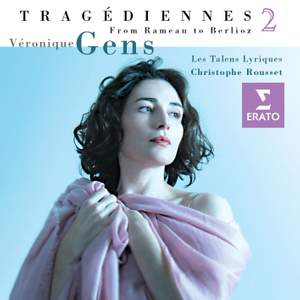 …a wonderful odyssey through late Baroque to early Romantic French opera. Gens's agile voice is the perfect vehicle to cope with these emotional extremes, from the enchanting to the chilling.... — BBC Music Magazine, August 2009, 5 out of 5 stars More…

Excerpt,  Sacchini, A: Oedipe a Colone

Soprano Véronique Gens, one of the leading French singers of today, presents an imaginatively programmed sequel to her award-winning 2006 recital of tragic operatic heroines.

This second album of Tragédiennes features arias and ballet music from the 18th and 19th centuries, from the Baroque (Rameau) to the Romantic (Berlioz) by way of such important transitional figures as Gluck – a composer whose heroine figure prominently in Gens’ schedule in 2010, with Alceste in Aix-en-Provence, Iphigénie en Aulide in Brussels and Iphigénie en Tauride in Vienna – Cherubini, and lesser-known figures such as Piccini, Sacchini and Arriaga, the ‘Spanish Mozart’, who died at the age of just 19.

Reviewing the first Tragédiennes, Opera magazine described Gens as “a soprano moulded by the best performance traditions of the French Baroque rediscovery of recent decades, but also one capable — as she has proved live and on record — of compassing Mozart and Berlioz in her repertory. Gens’s liquid-toned soprano … [with its] evenness of vocal production and command of line and tone ... is the programme’s binding and focal point, and always balm to the ears.”

Opera went on to say that “[the programme] shows off Gens’s sophisticated mastery of recitative declamation and aria-shaping and her considerable command of the various necessary vocal styles and manners, while at the same time blending historical nous, musical novelty, vocal attraction and dramatic liveliness in a manner rarely encountered today. The project was obviously carefully conceived and prepared; hard indeed to imagine it without Rousset and his splendid orchestra, who interleave the vocal items with some well-chosen instrumental items from the works in question … it’s a CD worth acquiring by anyone with the smallest interest in the singer, the period and the genres on display.”

As Gramophone said of the first album: “Gens's great gift is in differentiating between the various tragic heroines and bringing total dramatic commitment to each. There's anger spat out at white heat but there's also quiet, brooding hysteria – all characterised to perfection. And in Christophe Rousset and his Talens Lyriques she has partners on a truly exalted plane of imagination, musicality and sheer theatrical flair.”

…a wonderful odyssey through late Baroque to early Romantic French opera. Gens's agile voice is the perfect vehicle to cope with these emotional extremes, from the enchanting to the chilling. She is never afraid to sacrifice pure beauty of sound in favour of rhetorical and dramatic effect, giving due weight to the plights, laments and plangent outpourings of these timeless, tragic heroines. Rousset coaxes some crack playing from Les Talens Lyriques, combining the immediacy and intimacy of chamber music with all the colours and intensity of a large-scale symphony orchestra.

This second Tragédiennes volume is easily equal to the first and that must be praise enough. I would not immediately have thought of Gens as an ideal interpreter of Néris, Medea's confidante in Cherubini's opera, but she sings the aria, with its lovely oboe obbligato, with quiet dignity.

Gens's immaculate way with a text is often as mesmerising as her ability to sustain the long sculpted lines that are a common stylistic feature among her chosen composers. There are some surprises: she sings Cassandra's music from Berlioz's Les Troyens, where we might expect to hear her as Dido; when she turns to Cherubini's Medea, for what is probably the greatest track on the disc, it is to play the sorrowing maid Neris, rather than the pathological heroine.

The much-admired French soprano Véronique Gens presents an interesting selection of music drawn from the relatively little-known repertoire of French classical opera...it’s good to hear this music attacked with such gusto.