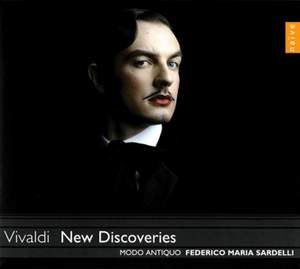 Vivaldi: Concerto for oboe and cello in G minor, RV812

Last year, Federico Maria Sardelli, who has made several contributions to the Vivaldi Edition, was appointed to take charge of the Vivaldi catalogue. It is now his job to authenticate any further manuscripts that turn up in what may be Vivaldi’s hand. Over the past ten years, thanks in part to the stimulus of the Vivaldi Edition project, several manuscripts by Vivaldi have surfaced in different countries. Federico Maria Sardelli has decided to record the finest of them. So this recording does indeed present new works by Vivaldi. The content is very diverse, ranging from a motet, which is performed by the mezzo-soprano Romina Basso, to an Oboe Concerto, a Recorder Concerto, arias and other gems. There is a clear pattern to these discoveries. Almost all come from peripheral sources, and most appear to originate from special commissions at the margin of the composer’s activity. The most imposing of the new works introduced here is a solo motet for contralto and strings, Vos invito, barbarae faces, RV811, only recently unearthed by Valerio Losito and Renato Criscuolo in the library of the basilica of S. Francesco, Assisi. The work is anonymous but is attributed to Vivaldi persuasively by Federico Maria Sardelli on the basis of several passages recurring in authenticated Vivaldi works.

This disc has some attractive novelties: an oboe concerto found among the big Berlin Sing-Akademie library; a violin sonata, lurking in an online catalogue, which is a real addition to the recital repertory; and a couple of isolated opera arias plus a motet, sung by Romina Basso.