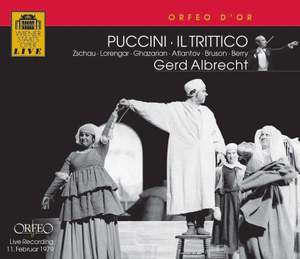 Choir and Orchestra of the Vienna State Opera, Gerd Albrecht

In 1979, Il Trittico was performed at the Vienna State Opera for the first time complete in the original Italian. Gerd Albrecht was in the pit, and the excitement that he was able to maintain throughout the evening comes across even when listening to this recording. No-one from the house ensemble here took on a role in more than one of the operas which resulted in a cast able to convey a maximum degree of identification with their respective roles.Thus the love triangle in Tabarro grips us thanks to Marilyn Zschau's energetic vocal achievement as Giorgetta and to Renato Bruson's mighty, flowing baritone as her jealous husband - thus equipped, he is even a match for the elemental vocal prowess of Vladimir Atlantov in the role of his rival.

In Suor Angelica, Pilar Lorengar offers a deeply moving interpretation of the title role, for she manages in masterly fashion to find the balance between beauty of sound and expressive power - a balance so hard to achieve in Puccini.The Swedish mezzo Kerstin Meyer is an impressive foil to her, for while her voice is more powerful than that of many of her famous peers, she still manages to convey a residual ounce of humanity behind her character's steely façade.And finally, as one would expect,Walter Berry's portrayal of Gianni Schicchi offers us a slice of life at its fullest, while Sonia Ghazarian as his daughter Lauretta has a voice ideal for the task.With Yordi Ramiro, Margarita Lilova and Marjana Lipovšek, the legacy hunters too are given real personality, while Erich Kunz, late in his career, provides a classic characterisation of the doctor Spinelloccio.