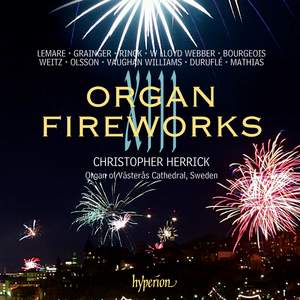 Herrick's playing and imaginative use of the organ's resources are first-rate, and he's backed up by a superb recording from Hyperion. — Gramophone Magazine, August 2009 More…

I. Introduction and Allegro 'Credo in unum Deum'

II. Handel in the Strand

Christopher Herrick continues the Scandinavian leg of his endlessly popular Organ Fireworks series with a disc of music performed on the great organ of Västerås Cathedral in Sweden. The programme is, as ever, a tempting pot-pourri of pieces from around the world, some popular, some rare; some light-hearted and some serious, and demonstrating all facets of virtuoso writing for the organ.

Highlights include a contribution from a Swedish composer: Otto Olsson’s magnificent Introduction and Allegro ‘Credo in unum Deum’. Duruflé’s Choral Varié on Veni Creator is a work of immense grandeur and majesty, and the performance shows Herrick to be a master of the classic French idiom. The present day is represented by Derek Bourgeois, one of the most prolific of living composers writing for the organ. Vaughan Williams’ Prelude and Fugue in C minor displays a gritty, truculent brand of counterpoint that anticipates the dissonance and fury of his Symphony No 4 in F minor. William Mathias’s Recessional is a classic ‘Organ Fireworks’ number: an athletic display of quick-fire semiquavers alternating with march-like passages with a tramping bass, and ending with a colourful, crashing explosion of notes.

Herrick's playing and imaginative use of the organ's resources are first-rate, and he's backed up by a superb recording from Hyperion.

This instrument makes a pretty spectacular noise … With plenty of incendiary reeds and pyrotechnic instruments, it provides yet another ideal organ on which Christopher Herrick can light his blue touch paper and not retire but leap onto the pyre and set off as many fireworks as he can in the space
of 78 minutes … He is a fluent and fiery champion of the repertoire … Herrick manages to persuade us that it is all worth hearing. He delivers it with enthusiasm and the communicative zeal which is the hallmark of just about everything this outstanding organist ever seems to put his hands and feet
to … For lovers of fine organ sound and often spine-tingly virtuoso playing … this disc most certainly is not thirteenth time unlucky