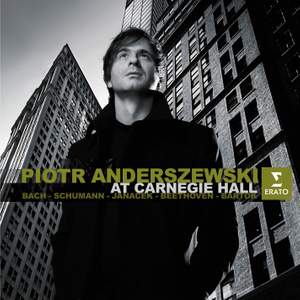 Piotr Anderszewski employs a small but incisive tone in the Bach Sinfonia, as though he is taking us into his confidence; the Allemande is sweet and unassuming, the Courante has warmth, the Sarabande... — BBC Music Magazine, June 2009, 4 out of 5 stars More…

Since his first release for Virgin Classics, Beethoven’s Diabelli Variations in 2000, Polish pianist Piotr Anderszewski’s has produced a catalogue which ranges from Bach and Mozart, through more Beethoven to Chopin, Szymanowski and Webern, and which includes several prizewinning recordings.

Both intellectual and inspirational, Anderszewski has said of musical interpretation: “One can speculate endlessly about the right ingredients, the perfect combination but the essential question remains unanswerable, lying far beyond the limits of the cleverest and most refined argument. And yet one goes on searching and, while realising that the search is about everything, the essence may yet reveal itself in the most unexpected way.”

This new release captures live performances by Anderszewski at a very recent recital – December 2008 – in New York’s legendary Carnegie Hall. The critic of the New York Times made clear that this was an exceptional musical experience.

After a performance so intense and draining, the notion of encores almost seemed superfluous. But Bartók’s Three Hungarian Folksongs from the Csik District had a welcome earthiness”

Anderszewski repeated the programme in Chicago shortly afterwards, and the response of the Chicago Sun Times was at a similar level of enthusiasm:

“There is something deeply comforting about the kind of perfection that Polish-Hungarian pianist Piotr Anderszewski brought to his program of Bach, Janácek and Beethoven … Perfection is a relative term when it comes to art, of course. There are myriad but equally valid ways to play a Bach partita or Beethoven sonata … Different artists plumb different facets in a piece of music, and listeners can only benefit from hearing what each one has managed to unearth.

But during the two hours or so that they are onstage, artists like Anderszewski manage to create a universe that seems utterly complete unto itself. There is a sense of inevitability in their performance, a feeling that the true essence of a composer's intentions has been discovered. Especially when our daily lives are battered by forces beyond our control, it is reassuring to spend an afternoon in a world of such richly calibrated balance.“

“It can be hard not to wax hyperbolic when confronted with the pianist Piotr Anderszewski’s sensitive touch and potent imagination.” New York Times

Piotr Anderszewski employs a small but incisive tone in the Bach Sinfonia, as though he is taking us into his confidence; the Allemande is sweet and unassuming, the Courante has warmth, the Sarabande has rapt expressiveness. As the Partita progresses, the playing becomes more exuberant: the Caprice is pure tumbling energy.

Some recital, this. Piotr Anderszewski establishes a commanding tone for the opening section of the Second Partita's Ouverture, hopping elegantly through the little march that leads on to a fast, immaculately voiced fugue. He uses the Courante's ornaments to 'lift' the melody line, and the play between a seamless legato and a gentle staccato accompaniment in the following Sarabande works wonderfully well. The Rondeau is again trippingly elegant, the closing Capriccio assertive in a way that balances it with the opening fugue.
Faschingsschwank aus Wien launches with a flourish: Anderszewski fractionally delays the opening's second chord in authentic Viennese style, while the Scherzo is full of telling though effective emphases, mostly along the lines of 'question and answer'. And yet in the ravishing Intermezzo he seems too aware of the notes (so many to negotiate). The finale works best, a fantastical sojourn dazzlingly negotiated.
Janácek's In the Mists is a given a peach of a performance, a sense of improvisation sitting securely at its heart. Each movement tells its own very personal story, or seems to, the third alternating idyll with searing drama. Anderszewski's mastery of simultaneously varied dynamics comes into play here but in Beethoven's Op 110 he can be just a little over-emphatic on detail – in particular the accompaniment that underpins the first movement's principal theme.
Throughout the recital the understandably enthusiastic Carnegie Hall audience is rather too keen to bound in at the end of each piece, a mild distraction on a recording that you hope to play again and again. This is an exceptional recital, and as ever the Carnegie Hall acoustic allows for a luminous piano tone.

Janácek's In the Mists is a given a peach of a performance, a sense of improvisation sitting securely at its heart. Anderszewski's mastery of simultaneously varied dynamics comes into play here… this is an exceptional recital, and as ever the Carnegie Hall acoustic allows for a luminous piano tone.

This is playing of exceptional insight and finesse, which few other pianists today could match.

. In Bach's Partita No 2 in C minor, he plays with warm expression, using all the possibilities of a concert grand, yet miraculously avoiding anachronism. His late Beethoven, Sonata No 31 in A flat, Op 110, has earthy tenderness, opening at a steady tempo which prepares beautifully for the serenity and majesty to come. Schumann's "Faschingsschwank", Janacek and Bartok complete this captivating recital.

This is an outstanding release that ought to give anyone an appetite for next month’s recital.

So acute is the positioning of the microphones that the force of his playing here and in the mighty fugal statements of the finale makes an emphatic, physical impact. But Anderszewski’s command of perspective is paramount. The soft playing is mesmerising, the scope of his interpretation geared to probing deep into the music’s inner expressive tissues.