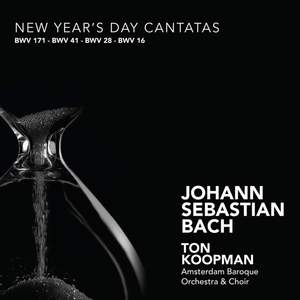 The New Year’s Day cantatas invariably display particular orchestral splendor in that all of them are richly orchestrated for brass and woodwind instruments in addition to the standard strings. Although not an important date in the liturgical calendar, New Year’s Day was of special importance in Leipzig because of the opening of the “Neujahrs-Messe,” the first of three annual trade fairs that brought scores of merchants and visitors to the city. This offered Bach an opportunity to exhibit Leipzig church music which had no parallel elsewhere. Four of the five cantatas used for this particular occasion are featured on this album. The texts of all five works make reference to the traditional Gospel reading of the feast day, Luke 2: 21 (the naming of Jesus); BWV 171 does it even in its first line (“Gott, wie dein Name…”). BWV 28, included in this album, is designated for the Sunday after Christmas and was first performed on December 30, 1725. However, the text of the opening movement as well as the use of a New Year’s hymn for the concluding chorale strophe emphasize this cantata’s proximity to the turn of the year.

These recordings have been selected from the award-winning cycle of recordings of the complete cantatas of J. S. Bach by Ton Koopman and the Amsterdam Baroque Orchestra & Choir. The featured soloists are sopranos Sandrine Piau, Deborah York and Sybilla Rumens, altos Annette Markert and Bogna Bartosz, tenors Christoph Pregardien, Jörg Dürmüller and Paul Agnew, and bass Klaus Mertens.