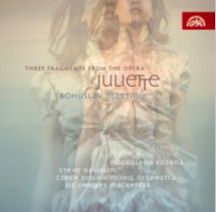 …the ardour of the exchanges are superbly captured by Mackerras and his instrumentalists. Magdalena Kožená is magnificent as the volatile Julietta and is excellently matched by Steve Davislim's... — BBC Music Magazine, June 2009, 5 out of 5 stars More…

I. Scene in the Forest (La scéne de la foret)

The fiftieth anniversary of the Czech composer’s death is marked by a superb programme of excerpts from his opera Juliette (conducted by Sir Charles Mackerras, with Magdalena Kožená in the title-role) and a collection of his chamber music from Ensemble Calliopée.

World Premiere recording of Three Fragments from the Opera Juliette.

On 11 December 2008 the sold-out Rudolfinum in Prague heard for the first time Three Fragments from the Opera Juliette, a work which ranks among Martinu’s most significant and which the composer himself highly esteemed. Martinu originally composed the opera Juliette in Czech. However, so as to ensure appropriate publicity for the work, he wanted – already armed with a French libretto – to place extracts from the most relevant scenes on French radio. Yet Three Fragments from the Opera Juliette (The Key to Dreams) was not broadcast on the radio and had to wait some 70 years for its first performance. This was entrusted to the safe hands of that most competent of conductors Sir Charles Mackerras, who has devoted a great part of his life to discovering Czech music and promoting it on world stages.

After experiencing Magdalena Kožená in the role of Juliette, it is hard to imagine another star singer in her place.

On this CD, Three Fragments is supplemented by the orchestral suite from the same opera, which sensitively treats the music of all three Acts and corresponds with the “dreamy logic” of the original.

Thanks to Martinu’s dreamily beautiful music and the remarkable engagement of all the interpreters, Sir Charle’s December leave-taking of the Czech Philharmonic Orchestra was transformed into a joint triumph.

…the ardour of the exchanges are superbly captured by Mackerras and his instrumentalists. Magdalena Kožená is magnificent as the volatile Julietta and is excellently matched by Steve Davislim's Michel. Along with three orchestral excerpts, including the opera's prelude, these fragments provide a fitting tribute to Mackerras's profound understanding of Martinu's musical character.

Mackerras directs a wonderful performance and while Kožená sings the title-role beautifully she is in excellent company. The Czech Philharmonic Orchestra play superbly throughout, not least in the sensible coupling of Zbynek Vostrák's expert arrangement of the three of Julietta's orchestral episodes. ...I cannot recommend this scintillating disc highly enough.

Lovingly conducted by Sir Charles Mackerras with the Czech Philharmonic, is another tantalising affair. As in the BBC’s recent full concert performance in London (also in French), the Kozená magic suits with the opera’s heroine, a haunting girl who exists only in dreams.