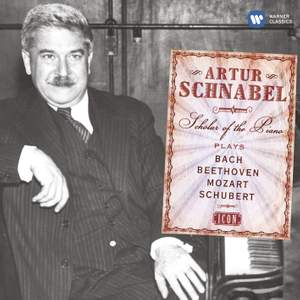 No. 3 in F minor (Allegro moderato)

No. 6 in A flat major (Allegretto)

No. 4 in A flat: Allegretto

Artur Schnabel was born on 17 April, 1882 at Lipnik Górny, a suburb of the modern-day Polish town of Bielsko-Biala. At the time of his birth this town would have been known as Bielitz, in what was then the Austro-Hungarian Empire. Schnabel died in 1951 at Axenstein in Switzerland.

He was the youngest of three children and when still a child the family moved to Vienna, where the young Schnabel took up studies with the legendary Theodor Leschetizsky, who also taught Paderewski and Moiseiwitsch. Schnabel remained a pupil of Leschetizsky's for seven years, from 1892 to 1897.

Schnabel's début took place in 1890 in Vienna and in 1900 he moved to Berlin, where he lived for 33 years. In 1905 he married the well-known contralto, Therese Behr, and the couple successfully toured the German provinces giving Lieder recitals.

The birth of their first son, Karl Ulrich, took place in 1909 and in 1912 a second boy, Stefan, was born. Karl Ulrich was to become a famous teacher and accomplished pianist: he features in two of the recordings in this set. A number of today's famous pianists studied with him, including Leon Fleisher and Peter Serkin. Stefan took up acting as a career and achieved a fair degree of success in both Germany and Hollywood.

Schnabel made his first recordings in 1930 of the Beethoven sonatas and concertos and, in 1933, the Schnabel family left Berlin a few months after Hitler took power. They lived in England for a while and in 1939 moved to the USA where, in 1944, Schnabel became an American citizen. Although resident in America, it was in Europe that he was more widely recognised and it was in London, for EMI, that Schnabel made virtually all of his great recordings.

This set of 8 CDs presents the incomparable Schnabel in a range of works by composers whose music he particularly admired and made a speciality of: Bach, Beethoven, Mozart and Schubert.