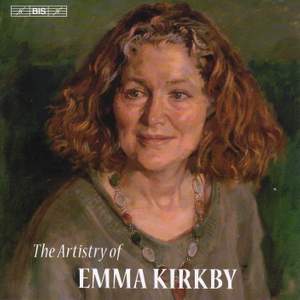 The Artistry of Emma Kirkby

…it's often in the modest-looking pieces that she's at her most compelling. Robert Johnson's Full Fathom Five is 109 seconds of breathtaking stillness and beauty, Böddecker's Natus est Jesu... — Gramophone Magazine, July 2009 More…

I saw my lady weepe

Dowland: Book of Songs, Book 3: Daphne was not so chaste as she was changing

Daphne was not so chaste

Dowland: Shall I strive with wordes to move?

Shall I strive with words to move

Danyel: Dost thou withdraw thy grace?

Lawes, H: At dead low ebb of night ('A tale out of Anacreon')

Blow: Sappho to the Goddess of Love

Sappho to the Goddess of Love

Ferrabosco, A II: So beautie on the waters stood

Greene, M: Orpheus with his lute

Emma Kirkby has enchanted audiences with her almost supernaturally clear and agile soprano ever since she first appeared on the Early Music scene in the 1970s. As the art of historically informed performance has become more and more widely appreciated, so has her style of singing to the extent that she was included in a listing of ‘the 20 greatest sopranos ever’ made by the BBC Music Magazine in 2007.

Released on the occasion of her 60th birthday, the present collection celebrates her collaboration with BIS and includes highly acclaimed performances of works from her repertoire such as Handel solo cantatas (with London Baroque) and Dowland songs (with Anthony Rooley and Jakob Lindberg) as well as pieces by less familiar composers, such as Ariosti and Amodei, de Lalande and Schimmelpfennig. This collection provides an opportunity to sample the work of an exceptional singer in all its variety.

The accompanying booklet includes a personal appreciation of the performer by music critic Brian Robins, as well as the texts – in the original languages with English translations where applicable – of all the works featured.

…it's often in the modest-looking pieces that she's at her most compelling. Robert Johnson's Full Fathom Five is 109 seconds of breathtaking stillness and beauty, Böddecker's Natus est Jesu a masterclass in how quietly to find variety and meaning in a piece that might have seemed to have little to offer. Artistry indeed, and praise to BIS for recognising how to honour it.