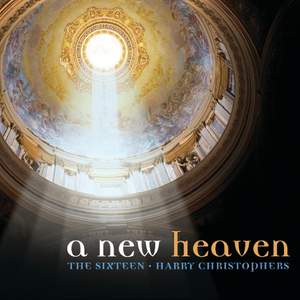 Hubert Parry's glorious Coronation anthem 'I was glad' unfolds in waves of increasing elation and broad, sweeping lyricism. It's a tremendous performance by The Sixteen, and it's an effective... — BBC Music Magazine, May 2009, More…

Bainton, E: And I saw a new heaven

Parry: My soul, there is a country (No. 1 from Songs of Farewell)

Stainer: I saw the Lord

After thirty years of world-wide performance and recording, The Sixteen, "The Voices of Classic FM", are recognised as one of the world’s greatest ensembles. Comprising both choir and period instrument orchestra, The Sixteen's total commitment to the music it performs is its greatest distinction. Its special reputation for performing early English polyphony, masterpieces of the Renaissance, bringing fresh insights into Baroque and early Classical music and a diversity of twentieth century music, is drawn from the passions of conductor and founder, Harry Christophers.

The Sixteen’s album IKON was nominated for a 2007 Grammy.

A New Heaven narrows the gap between our secular age and a time when the Anglican Church was among the most important patrons and consumers of British music. It also offers listeners the chance to reconnect with spiritual matters richly expressed by composers with the flair and imagination required to distil big issues of life and death into miniature forms.

Hubert Parry's glorious Coronation anthem 'I was glad' unfolds in waves of increasing elation and broad, sweeping lyricism. It's a tremendous performance by The Sixteen, and it's an effective composition. There are many others like it… These are proud, expansive, superlatively sung performances...

…The Sixteen provide such precision in their attention to detail in dynamics, diction, attack and, most of all, intonation. For me, however, the most luminous singing is reserved for Parry's My soul, there is a country where, owing to the careful shading of dynamics, the meaning of Vaughan's poem is conveyed with a new and revelatory insight.