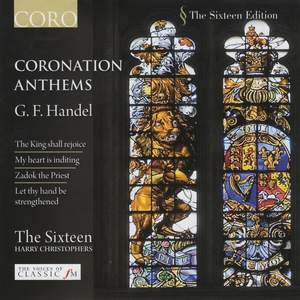 With St Paul's Deptford standing in for Westminster Abbey the acoustic is ideally focused - no 'billow' blurring the edges of a wonderfully buoyant 'The King Shall Rejoice' (its ensuing 'Exceeding... — BBC Music Magazine, March 2009, More…

Solomon: Arrival of the Queen of Sheba

My heart is inditing

Upon thy right hand

Kings shall be thy nursing fathers

The King shall rejoice

Exceeding glad shall he be

Let thy hand be strengthened

Part 3, Worthy is the Lamb that was slain - Chorus

Harry Christophers and The Sixteen add a brand new recording of Handel’s Coronation Anthems to their stunning catalogue of Handel discs.

In one of his last undertakings before his death in 1727, King George I signed an ‘Act for the naturalising of George Frideric Handel’ amongst others. One of Handel’s first tasks as a naturalised British Citizen was to write the music for the Coronation of the new monarch - King George II which was to take place later that year. Rarely did a composer of the day have such an audience for his new works and Handel’s four Anthems were written to match the pomp and grandeur of the occasion and, of course, the venue – Westminster Abbey. The Coronation Anthems have delighted audiences ever since and appear in all their glory on this recording interspersed with a selection of Handel favourites including Arrival of the Queen of Sheba, Handel’s Organ Concerto in F Major Op. 4 No. 4 and two extracts from Messiah.

With St Paul's Deptford standing in for Westminster Abbey the acoustic is ideally focused - no 'billow' blurring the edges of a wonderfully buoyant 'The King Shall Rejoice' (its ensuing 'Exceeding Glad' delivered with an irresistible lightness of touch), and if 'My Heart is Inditing' sometimes sounds over-manicured, the orchestra can be relied upon to inject a bit of edge when the singing rises to the Royal occasion with aristocratic detachment. ...overall, this is a regally polished programme.

There are plenty of very good recordings of the four anthems that Handel composed for the coronation of King George II and Queen Caroline, but this new one by The Sixteen leaps straight towards the top of the heap (those preferring to hear boy trebles might already admire the excellent version by King's College, Cambridge, under Cleobury, above).
We have come selfishly to expect reliability, stylishness and honest fine musicianship from Harry Christophers, his singers and instrumentalists.
Yet these fresh, spontaneous and vivacious performances are revelatory. Not only is the choral singing wonderfully clear, perfectly enunciated, beautifully phrased and impeccably tuned, but also the orchestral playing – an aspect too often relegated to auto-pilot in this repertoire – is brilliantly alert, bold and lyrical. Zadokthe Priest never fails to make a strong impression even in average performances (and The Sixteen's expertly judged reading is anything but average), but the special quality of this disc is that the other three lesser-known anthems also receive performances that allow them to shine just as brightly as the most famous (and shortest) anthem. My heart is inditing is radiantly performed ('The King shall have pleasure in her beauty' is gorgeously shaped), The King shallrejoice is splendidly poised and paced, and the first part of Let thy hand be strengthened conveys the perfect juxtaposition of forthrightness and elegance. Christophers's sure direction locks onto the musical interest and richness of each section in the longer anthems (some other good versions rely on good openings and grand conclusions, but the bits in between sometimes get a bit lost). Coupled with a sparkling account of the Organ Concerto Op 4 No 4 (superbly played by Alastair Ross, and with a magnificent choral 'Alleluia' finale created for the 1735 revival of Athalia), a couple of orchestral interludes and the last chorus of Messiah, the judicious programme avoids the overkill factor one sometimes encounters when all four anthems are heard consecutively.
Donald Burrows's booklet-note is ideally detailed and accessible, and overall this disc ranks as The Sixteen's most exciting achievement in its impressive Handel discography.

…these fresh, spontaneous and vivacious performances are revelatory. Not only is the choral singing wonderfully clear, perfectly enunciated, beautifully phrased and impeccably tuned, but also the orchestral playing… is brilliantly alert, bold and lyrical. ...overall this disc ranks as The Sixteen's most exciting achievement in its impressive Handel discography.

Harry Christophers brings the same fire to these perfect miniatures that he brought to his triumphant Messiah last year, firmly establishing him as the Handelian of the moment. Let Thy Hand Be Strengthened, Zadok the Priest and The King Shall Rejoice all fizz and crackle but best of all is My Heart Is Inditing, sung with a rich, classy poise.

What a strange decision to pad out the four anthems that Handel composed for the coronation of George II in 1727 with well-known bits and pieces from the rest of the composer's oeuvre. With the exception of the Organ Concerto No 4 – given here in the original version with a choral finale – the additional works dilute rather than strengthen the disc's attraction.
It's not as if the Coronation Anthems lack popular appeal – one of them is the great crowd-pleaser Zadok the Priest. Here Christophers opts for surprise rather than suspense in the famous build-up but otherwise the disc's musical quality is dependably high.