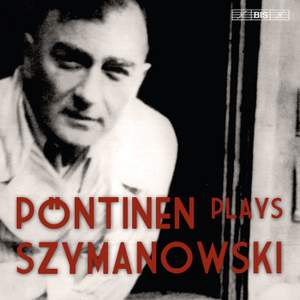 Roland Pöntinen's generously filled and beautifully engineered recital features three of Szymanowski's most exotic and harmonically daring middle-period works together with a handful of Mazurkas... — BBC Music Magazine, April 2009, 4 out of 5 stars More…

The impressionistic Métopes was composed in 1915, following a visit to Sicily. The title refers to the spaces on a classical frieze in which a sculptor would add decorative scenes, and each section depicts a character and location from Homer‘s Odyssey. One year later came the trilogy Masques, which portrays the story-telling Shéhérazade, an episode from the legend of Tristan and Isolde and a Sérénade de Don Juan. Soon after these examples of programme music, the composer returned to pure sonata form in the Third Sonata, his last major work for solo piano. This remains based in Impressionism, but also achieves a synthesis between that and the style of earlier works

Roland Pöntinen's generously filled and beautifully engineered recital features three of Szymanowski's most exotic and harmonically daring middle-period works together with a handful of Mazurkas that were composed near the end of his life. The Swedish pianist gives very persuasive accounts of these later more emotionally restrained pieces projecting their melodic lines with great sensitivity without disrupting their natural dance-like flow.