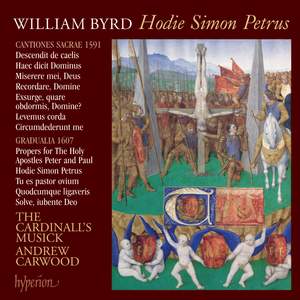 …this performance is unparalleled in its depth of expression and intelligence. The Cardinall's Musick unerringly leads the listener to musical events that unlock Byrd's conception. These may... — BBC Music Magazine, April 2009, 5 out of 5 stars More…

This latest release in The Cardinall’s Musick complete Byrd Edition is surely one of the most eagerly-awaited events in the early music calendar. Previous discs in this award-winning survey of the greatest composer of the age have commanded the highest possible critical acclaim. Performances of filigree clarity, yet great passion and sincerity, allow the composer’s particular genius to shine forth in an unhindered blaze of glory. The works in this eleventh volume present Byrd the recusant: covering the last year of his fashionable career in London and moving to a quieter life in the Essex countryside. The music is from two sources: the magnificent Cantiones Sacrae of 1591 and the Gradualia from 1607. The seven motets from 1591 show Byrd to be pre-occupied with thoughts of desolation, loss, deprivation and separation—familiar ideas for the recusant Catholic community. A feeling of angst in the music is leavened by a sense of salvation and a glimmer of hope which is the composer’s constant refrain. The Gradualia are some of the most imaginative, modern-sounding and energetic music that the composer ever wrote. The Cardinall’s inspirational director Andrew Carwood sets the scene with fascinating booklet notes that illustrate the complex political and religious circumstances in which this great music was engendered.

…this performance is unparalleled in its depth of expression and intelligence. The Cardinall's Musick unerringly leads the listener to musical events that unlock Byrd's conception. These may be either one word invested with meaning ('miseracordium' in the celebrated 'Miserere mei, Deus'), a climax throughout a movement (in 'Circumdederunt me'), or a gesture that accrues meaning (the descending triad in 'Hodie Simon Petrus'). Crystalline sound reproduction ensures that every detail is captured.

The completion of this series will be a landmark, but don’t wait to hear this beautiful disc

Andrew Carwood's programme-note begins with a comment on the motet Haec dicit Dominus with which the programme ends. The lament of Rachel weeping for her children is thematic, if indeed we are to see these Cantiones sacrae of 1591 as a cry on behalf of the old, true believers besieged in a Protestant stronghold. As Rachel wept then, so (it is suggested) does the Church now. And yet there is hope ('et est spes') and this is the message reiterated throughout these heartfelt works of a master craftsman.
This is the 11th volume in The Cardinall's Musick's edition of Byrd's Latin settings. Apart from the Cantiones, the other major source is the Gradualia of 1607, probably written for the Catholics of Ingatestone Hall in Essex. The Litany from Book 2 (1605) is the principal variant in the mode of composition, which is dense in imitative polyphony, usually in six parts, concentrated in the intensity of their utterance.
Particularly fine examples are the Miserere mei,Deus and the vigorous Exsurge, quare obdormis,Domine? with its strong, well defined climax.
The performances are admirably directed, responsive to words, clear in their exposition of counterpoint, carefully blended in the homophonic passages. The Cardinall's Musick is an expert body of singers who know exactly what they are doing. Even so, balance and tone are not everywhere ideal: the bass-line, for instance, though utterly reliable, has been so stripped of natural vibrancy that the tone is dulled. A small point, no doubt, in relation to the riches their work is opening up.

The performances are admirably directed, responsive to words, clear in their exposition of counterpoint, carefully blended in the homophonic passages. The Cardinall's Musick is an expert body of singers who know exactly what they are doing.

The works for St Peter and St Paul … positively shimmer with exuberance … the beauties of these performances are revealed: litheness, energy and intelligence

All save one of these works come from two collections published by William Byrd, Cantiones Sacrae, of 1591, and the 1607 Gradualia, the former among his most deeply touching pieces. Descendit de caelis, a setting of a respond for Christmas Day, tells of anguish rather than joy, betraying the heavy oppression that recusant Catholics, of whom Byrd was one, suffered in Elizabethan England. The pieces from Gradualia are all six-voice motets for the feast of Saints Peter and Paul, in which we hear Byrd at his most modern, with lively rhythms and dense, closely imitative counterpoints. Carwood and his 10 singers relish the music’s expressivity and sophistication to the full.