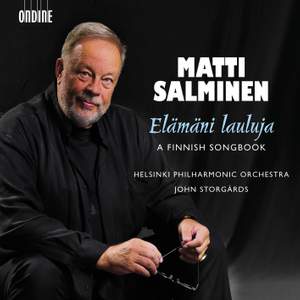 One of the greatest operatic basses of his generation and beyond, Matti Salminen…is, in effect, simply a folksinger. As its cosy "Finnish Songbook" title suggests, his latest disc celebrates... — Gramophone Magazine, April 2009 More…

King Kristian II, Op. 27: IV. The Song of the Cross-spider

Merikanto, A: Tuijotin tulehen kauan (Long gazed into the fire), Op. 2, No. 2 (arr. for bass and orchestra)

Kuula: Kesayo kirkkomaalla (Summer Night in the Churchyard), Op. 6, No. 1 (arr. for bass and orchestra)

No. 2. Tuuli se taivutti koivun larvan (The Wind Bent Down)

Matti Salminen is an acoustic phenomenon, according to many the finest and darkest bass voice of our time. In the 1970s and ‘80s he inherited mantle of the legendary Martti Talvela as the great Finnish Wagner bass in Bayreuth, until, to the regret of Wolfgang Wagner, he decided to devote his summers to the Savonlinna Opera Festival in Finland. James Levine, for his part, considers Salminen so essential that the scheduling of Wagner operas at the Met is adjusted to suit Salminen's diary. Salminen's journey to his present status has been a long one.The son of a working-class family, he earned his living at first as a tango king on Finnish dance-floors. From the dance-floor, his career has taken him to all the important opera houses of the world to sing with conductors including Daniel Barenboim, James Levine, Nicolas Harnoncourt and Pierre Boulez. On this new recording, Matti Salminen performs rarities outside the standard repertoire and delivers a personal account of orchestral songs from Finnish composers.Accompanied by the Helsinki Philharmonic under its new chief conductor John Storgårds, Salminen is completely at home singing this music. Many of these songs about nature and love deserve greater attention or discovery, for which this exceptional disc forms a perfect vehicle.

One of the greatest operatic basses of his generation and beyond, Matti Salminen…is, in effect, simply a folksinger. As its cosy "Finnish Songbook" title suggests, his latest disc celebrates the naturalness of his art, and the predominantly slow and lugubrious sequence of songs here ranges from mini-masterpieces by Sibelius to traditional numbers.