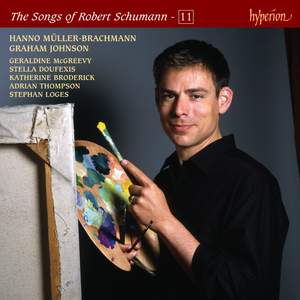 The Songs of Robert Schumann - Volume 11

A real disc of discovery: this is Schumann as he is seldom heard. In this final volume of his revelatory Songs of Robert Schumann series, Graham Johnson perceptively writes about, accompanies... — BBC Music Magazine, February 2009, 4 out of 5 stars More…

Graham Johnson’s monumental and triumphant complete Schumann Songs edition comes to an end with an eleventh disc of rarities and delights. The first issue in the Hyperion edition of Schuman’s songs, with the soprano Christine Schäfer, included a number of the composer’s later lieder, and with this last issue we come full circle in returning to some of the least known songs—music seldom heard on the concert platform. Hanno-Müller Brachmann appears in his debut recording for Hyperion. As well as a devoted lieder singer who has performed with some of the greatest living pianists, he is also a considerable presence on the world’s opera stages and an acclaimed interpreter of Bach’s Passions. He brings all these qualities to this fascinating disc.

Various duets and ensemble pieces are included on this disc and feature familiar and well-loved singers from elsewhere in this series, as well as the winner of the 2008 Kathleen Ferrier Prize: Katherine Broderick. The release is complemented by Graham Johnson’s renowned booklet notes, which make these discs things of such inestimable value.

A real disc of discovery: this is Schumann as he is seldom heard. In this final volume of his revelatory Songs of Robert Schumann series, Graham Johnson perceptively writes about, accompanies and presents still more rarities, in the voices of both loyal colleagues and of younger singers whom he keenly champions.

Hyperion's Schumann Song Edition ends, as it began 12 years ago, with a recital devoted largely to the problematic late songs of 1849-52.
With the odd exception, these have often been castigated, not least by Eric Sams in The Songs ofRobert Schumann, as the products of a torpid and increasingly sick mind. But though most of the songs on this disc tend to be more understated, less romantically subjective than those of Schumann's great song year, 1840, the best of them are not necessarily inferior to their predecessors, just different.
There are undeniable duds, usually when Schumann is in hearty or heroic vein, alongside touching lyrics like the fragile 'Heimliches Verschwinden', the rapturous 'Liebster, deine Worte stehlen', or 'Provenzalisches Lied', a piquant celebration of courtly love.
The lion's share of the programme, including the six Reinick Songs falls to baritone Hanno Müller-Brachmann, whose singing is more notable for robust directness than subtlety. He exploits his deep bass resonances to good effect in 'Sonntags am Rhein', that quintessential song of pious Biedermeier contentment. In 'Liebesbotschaft, Müller-Brachmann sounds lugubrious, despite the flowing tempo, rather than tenderly devoted. He is at his best in declamatory, dramatic mode, recounting a minstrel's bloody revenge in 'Ballade', or in a powerful and atmospheric performance of another chivalrous ballad, 'Der Handschuh'.
Elsewhere there are welcome cameo appearances from Adrian Thompson (graceful and smiling in 'Provenzalisches Lied'), Geraldine McGreevy and Stella Doufexis, who combine with baritone Stefan Loges in two attractive quartets from the Rückert Minnespiel. Katherine Broderick, a Wagnerian soprano of the future, impresses with her vibrant intensity in the three Op 95 songs, though even she and Johnson cannot disguise the bombastic tawdriness of 'Dem Helden'. Whatever the provisos, this disc goes far to vindicating some of Schumann's leastfavoured late songs, not least due to Graham Johnson's eloquent advocacy, in print and in performance.