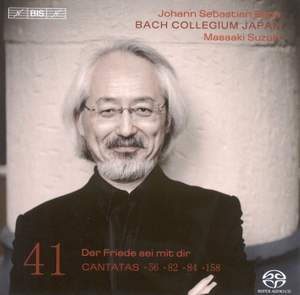 With singers on the top of their form, this disc is utterly absorbing from start to finish. 'Ich habe Genug', BWV82… is here in Bach's alternative for soprano, with flute replacing oboe. What... — BBC Music Magazine, February 2009, 5 out of 5 stars More…

As on two other recent instalments (Vols 37 & 38) in his Cantata cycle, Masaaki Suzuki here concentrates on the so-called solo cantatas, providing an opportunity for two of the highly acclaimed soloists of this series, Carolyn Sampson and Peter Kooij, to shine even more brightly.

Of the two cantatas for soprano, Ich habe genung (BWV82) is among the best-known of all of Bach’s cantatas, and was evidently held in high regard from an early stage. It was originally set for bass (and appears as such on Volume 38), and source materials show that Bach performed it at least four times. Bach’s wife Anna Magdalena must also have been especially fond of it: a partial arrangement for soprano and harpsichord was included in her second Klavierbüchlein. Ich bin vergnügt (BWV84) is a slighter work in which the oboe plays an important soloistic part. Ich will den Kreuzstab gerne tragen, the weightier of the bass cantatas, is a meditation on the cross of Jesus, but also on the suffering and need that mankind must bear. The texts, by an unknown librettist, inspired Bach to produce music of sublime earnestness, great expressive depth and full of rich, immediate imagery.

Whereas these three cantatas were all composed during the winter of 1726-27, Der Friede sei mit dir has a less certain place in the chronology. It is in fact probable that it was assembled from movements from various sources, perhaps by an arranger rather than by Bach himself.

With singers on the top of their form, this disc is utterly absorbing from start to finish. 'Ich habe Genug', BWV82… is here in Bach's alternative for soprano, with flute replacing oboe. What is lost in balance is gained in pathos for this heartfelt Song of Simeon. Carolyn Sampson's floating line in dialogue with flute, portraying calm acceptance of death in the almost time-less opening movement, is deeply moving, as is her unaffected simplicity in the following lullaby...

Carolyn Sampson is radiant in her two cantatas. Ich habe genug rarely seems to me as incrementally effective in E minor as in the earlier bass version but Sampson brings a resigned pathos as persuasive as anything you'll hear. …"Schlummert ein" offers a delicate blend of flute and strings to underpin a beautifully judged innocence of expression, reaching its apogee in an exquisite pianissimo da capo.