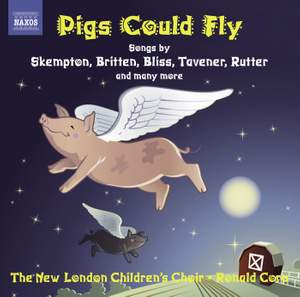 Corp: Give to my eyes Lord

No. 3. The early nightingale

Chilcott: The Lily and the Rose

Jane Taylor: Oven in the underworld

Woolrich: No hiding place down there

Rutter: For the beauty of the earth

I. The Insect World

Corp: At day-close in November

We're all in the dumps

The goose and the gander

While children’s voices have been heard in church music for centuries, music specifically composed for young choristers is a relatively recent, and most welcome, development.

As the attractive and diverse music by the fourteen composers represented on this delightful recording shows, children’s choirs now have a wealth of outstanding repertoire to delight, challenge and initiate them into the world of music.

The Grammy award-winning New London Children’s Choir, founded by Ron Corp in 1991, has been described by the Financial Times as “excellent” and by The Independent as “terrific.”

They have performed in the UK, Europe and North America to critical acclaim and boast an impressive discography, including two recordings of music by Britten for Naxos (8553183 and 8557203).