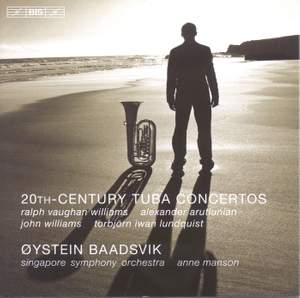 Norwegian tuba virtuoso Øystein Baadsvik explores 20th-century works including concertos by the Georgian composer Alexander Arutiunian and the Swedish composer Torbjörn Lundquist plus Vaughan Williams’ Concerto for Bass Tuba which was at first considered a last eccentricity of an aged composer, but with the passing of time it has become recognized as a classic. John Williams first included a big tuba solo in a film score. His Concerto for Tuba and Orchestra is a light and tuneful work.