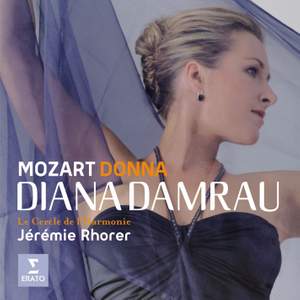 Diana Damrau's intelligently planned and superbly executed recital… I can’t remember when I last enjoyed a Mozart recital of this kind so much. — BBC Music Magazine, December 2008, 5 out of 5 stars More…

In her second recording as an exclusive Virgin Classics artist Diana Damrau interprets concert and operatic arias by Mozart in a programme which displays her virtuosity and impressive vocal range.

From her first recording everyone noted her outstanding Queen of the Night – here she is Pamina (in New York’s Met last Fall, Diana Damrau alternated the two roles with brio). She is also Susanna and the Contessa (Le Nozze di Figaro), Konstanze and Blonde (Die Entführung), Donna Anna and Elvira (Don Giovanni), Servilia and Vitellia (La Clemenza di Tito), pairing major soprano roles within the operas, and concert arias.

Diana Damrau's intelligently planned and superbly executed recital… I can’t remember when I last enjoyed a Mozart recital of this kind so much.

…Jérémie Rhorer draws tangy, rhythmically lively playing from his period band. "Taste", "fire", "flexibility", "sweetness", "grace of execution" - these were the qualities especially prized in singers of Mozart's day. On this showing Damrau, like Lucia Popp before her, has them all.