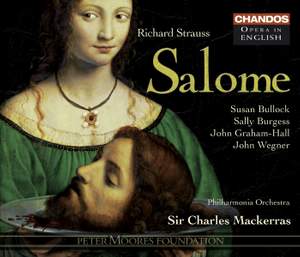 …Bullock underlines the increasing insistence of Salome's demand for John's head… and keeps the meaning clear even when riding the orchestra in her love-death. If it were only for the orchestra... — BBC Music Magazine, December 2008, 4 out of 5 stars More…

Scene 2: Who spoke then, who was that calling out? (Salome, 2nd Soldier, Narraboth, Slave, 1st Soldier, Jokanaan, Page)

Scene 3: Where is he, he, whose sins are now without number? (Jokanaan, Salome, Narraboth)

Scene 3: It's your mouth that I desire, Jokanaan (Salome, Jokanaan, Narraboth)

Scene 4: See, the time is upon us (Jokanaan, Herodias, Herod, Jews, 1st Nazarene)

Scene 4: Brothers, the day is near us, the day of the Lord (Jokanaan, Herod, 1st Nazarene, 1st Jew, 2nd Nazarene, Herodias)

Scene 4: Give me the head of Jokanaan! (Salome, Herod, Herodias)

Scene 4: I hear no noise from below there (Salome)

Scene 4: Ah! You would not let me kiss your mouth, Jokanaan! (Salome)

Scene 4: Your body was an ivory column (Salome)

Scene 4: You have an evil monster for a daughter (Herod, Herodias, Salome)

Salomes Tanz, TrV 215a, "Dance of the Seven Veils"

Sir Charles Mackerras’s recordings are well-established collectors’ items. His consistently brilliant reviews confirm that his music-making belies his years, and his new opera recordings have become benchmarks for the Chandos Opera in English series.

Chandos’s disc of the month sees Sir Charles pick up his baton to conduct leading dramatic soprano, Susan Bullock and the Philharmonia Orchestra in his first ever recording of Richard Strauss’s Salome. This is also the premiere recording in English and follows the Grammy win for Hansel and Gretel earlier this year.

Richard Strauss is a composer for whom Sir Charles holds in deep affection. He explains “I’m just amazed that he could have written it [Salome]. Every page has something that hadn’t been done before, not even by Wagner. Bitonality, whole tone scales, everything! Endlessly varying the leitmotifs so that they take on different meaning… remarkable, and such a lesson in the use of the orchestra… it’s just superb… even if you have not heard a note of Strauss before you will be swept along by the power of the music.”

Susan Bullock has previously performed Salome in the concert format and her performances in the role of Strauss’s Elektra have brought her international acclaim. MusicWeb International wrote of her Salome “we were treated to a show-stealing dramatic performance in which her character’s complicated and confused emotions were plainly visible.” She performed the role of Elektra at the Royal Opera House, Covent Garden in November 2008

…Bullock underlines the increasing insistence of Salome's demand for John's head… and keeps the meaning clear even when riding the orchestra in her love-death. If it were only for the orchestra alone, this would now be the Salome of choice… ineffably paced towards shocking climaxes, diaphanously clear, full of expressive orchestral solos (first violin especially) and naturally balanced...

Language apart, the distinction of this recording lies in the superb playing of the Philharmonia Orchestra under Sir Charles Mackerras.

Mackerras is not usually mentioned when outstanding Strauss conductors are considered. But as this latest addition to Chandos's Opera in English series shows, he is an outstanding Straussian, and it's his account of a score that, in the past, has been characterised as a tone poem with voices, together with the Philharmonia's gorgeously vivid playing of it, that makes this so memorable.