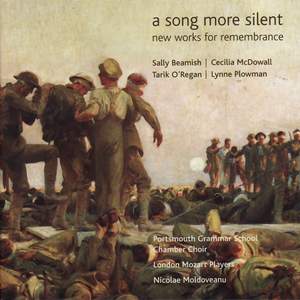 Beamish: The Lion And The Deer

The title, “a song more silent” is taken from the e.e.cummings poem “these children singing in stone” as used in “Cries Like Silence” composed by Lynne Plowman

Portsmouth Grammar School is uniquely placed to make this recording. The school is located in 19th-century barracks at the heart of a Garrison City, once the location of Richard the Lionheart’s palace. Soldiers have been sent around the world from this site for centuries. It has been suggested that more pupils lost their lives in the two World Wars than at any other school of comparable size.

In 2008 Portsmouth Grammar School commissioned Sir Peter Maxwell Davies to write a choral setting of Andrew Motion’s poem about the longest-surviving soldier from the First World War, Mr Harry Patch (who died in 2009 at the age of 111). The Five Acts of Harry Patch was premiered on Sunday 9th November 2008 at Portsmouth Cathedral.