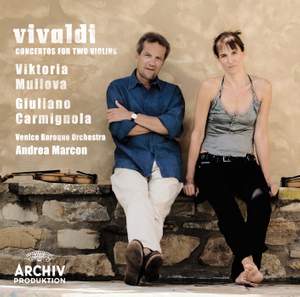 …sparkling playing with slow movements, in particular those belonging to RV 516 and RV 509 yielding an air of pure enchantment. — BBC Music Magazine, November 2008, 4 out of 5 stars More…

Vivaldi: Concerto In A Minor For 2 Violins, Strings, And Continuo, RV 523

Two of today’s most charismatic, attractive and original violinists join forces for an album of Double Concertos by Antonio Vivaldi

Viktoria Mullova, “the most elegant, refined and sweetly expressive violinist on the planet” (The Chicago Tribune), and Giuliano Carmignola, “a prince among baroque violinists” (Gramophone), team up with one of the greatest early music ensembles – the Venice Baroque Orchestra under Andrea Marcon

This highly commercial repertoire has been recorded before but never by a world-class pair such as Mullova and Carmignola. Thus the album is very likely to become a best-seller

…sparkling playing with slow movements, in particular those belonging to RV 516 and RV 509 yielding an air of pure enchantment.