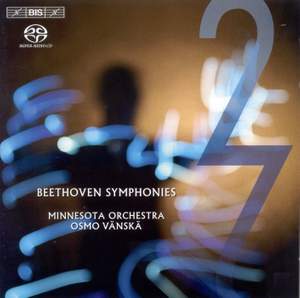 …these are performances that can hold their own with the best, and the quality of the recording… immaculate. …a superb conclusion to a worthwhile cycle. — BBC Music Magazine, December 2008, More…

Beethoven’s Symphonies Nos. 2 and 7 make up the fifth and final instalment of the Symphony Cycle with conductor Osmo Vänskä and Minnesota Orchestra; a cycle which has received universal praise.

The first instalment in Osmo Vänskä’s and Minnesota Orchestra’s Beethoven cycle was released in December 2004 and was immediately praised for the performances as well as for the state-of-the-art sound. The following discs have if anything strengthened the case for this cycle. With such forerunners it is not surprising that the present disc, closing the cycle, has been eagerly awaited.

The disc opens with Symphony No. 2, completed in 1802 during one of the darkest periods of the composer’s life, as he was struggling to reconcile himself with his encroaching deafness. Under the circumstances, as Beethoven specialist Barry Cooper points out in his liner notes, a striking feature of the work is ‘its thoroughly optimistic character throughout – it is almost as if he was using the symphony as a means of escape.’ Following it is the Seventh Symphony in which the strong rhythmic drive that pervades all four movements has made it a favourite in the concert hall – among its admirers is found Richard Wagner who famously dubbed it ‘the apotheosis of the dance’.

…these are performances that can hold their own with the best, and the quality of the recording… immaculate. …a superb conclusion to a worthwhile cycle.

This coupling of the Second and Seventh symphonies points up what Rob Cowan has called Vänskä's ability to 'focus the music's rhythmic profile with unwavering control'. Not that the performances are control-orientated. Even where the metronomes are good and speed is of the essence, as in the finale of the Second Symphony, quickness does not preclude ease.
In the Seventh Symphony, Vänskä keeps the harmonic drama in as sharp a focus as the rhythmic.
The pulse may be quicker, the sound tauter, but the epic first movement breathes here much as Klemperer would have allowed it to breathe.
With Vänskä, old insights are not necessarily invalid insights. In the Allegretto and thirdmovement Trio there is a reversion, not to oldfashioned Teutonic slowness, but to thoughtful tempi that are on the measured side of quick.
What is truly outstanding here is the transparency of the texturing and the meticulous integration of phrase shape and accent within the rhythmic continuum. Everything is audible but since Vänskä is not a didactic conductor nothing is italicised or underlined. That said, the violins' extraordinarily precise articulation of the Second Symphony's notorious seventh bar, with its arch of double-dotted trilled quavers and interior grace notes, may shock collectors used to the old pre-Bärenreiter fudges.
The BIS recording has exceptional clarity, with finely judged reverberation times, and a dynamic range that catches every gradation of the orchestra's scrupulously judged sound profile right down to pianissimi of quite astonishing beauty and restraint.

What is truly outstanding here is the transparency of the texturing and the meticulous integration of phrase shape and accent within the rhythmic continuum. Everything is audible but since Vänskä is not a didactic conductor nothing is italicised or underlined.

Both symphonies are played with great care and affection, while Vänskä's conducting is consistently and admirably lucid. The dividends are enormous when it comes to the elusive Second Symphony - few rival versions have quite so effortlessly captured its Janus-faced nature