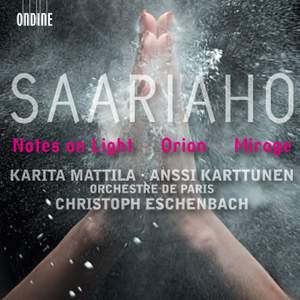 Saariaho has always had an extraordinary ear for a beauty of sound, best described in terms of light. …performances have that extra edge which live recording brings. — BBC Music Magazine, September 2008, 4 out of 5 stars More…

Following the acclaimed 2006 song cycle Quatre Instants, the latest collaboration from star soprano Karita Mattila, and her compatriot Kaija Saariaho, is Mirage, the setting of a trance-induced incantation by the Mexican healer María Sabína (1894-1985). This recording features the work's world première performance from March 13th, 2008 in Paris. The ecstatic 15-minute piece is written for soprano, cello and orchestra, featuring cellist Anssi Karttunen and the Orchestre de Paris Orchestre de Paris under its music director Christoph Eschenbach. Anssi Karttunen performs Notes on Light, the cello concerto that Saariaho wrote for him in 2006. Also featured on this CD is Orion, the largest orchestral work Saariaho has written to date.

Saariaho has always had an extraordinary ear for a beauty of sound, best described in terms of light. …performances have that extra edge which live recording brings.

Light is the element that allies Kaija Saariaho to so many of her Nordic peers; that, plus related things such as fire, sky, eclipse and mirage, all of which feature as titles or subtitles in the three pieces recorded here. Musical textures that shimmer, scintillate, explode, darken and extinguish are her bridge between modernism and tradition, and potentially also the listener's path from familiar modes of listening into her fascinating, never vulgarly gratifying, realm of sonic imagination.
These performances from the '100

These performances… are just about ideal as introductions to Saariaho… Anssi Karttunen and Karita Mattila… combine to magical effect in Mirage, where they jointly interpret the transformations of the woman in Mexican shaman-healer María Sabina's ecstatic text (set in English). ..Orion - inspired by the mortal and cosmic aspects of the mythological hunter - deserves to figure on any short list for orchestral masterpiece of the new millennium. Kaleidoscopic orchestral colour, remote from human gesture and drama but rich in intellectual imagination, is a dimension in which Christoph Eschenbach excels, and demonstration recording quality of the kind Ondine supplies is the other notable ingredient in this compelling programme.