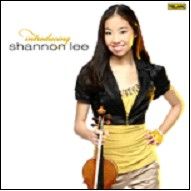 Shannon Lee is a young violinist who is tipped for great things. In the summer of 2005, she made her stunning orchestral debut at the age of 12 with the Dallas Symphony Orchestra, performing the Chausson “Poeme” and Franz Wexman’s extremely challenging Carmen Fantasy. Later that same year, she was the featured soloist for the Dallas Symphony’s Texas Tour, and in 2006 she made her European debut with the Nuremberg Philharmonic Orchestra.

Introducing Shannon Lee is a wonderful collection of pieces that include the well known and the rare. Each of the works spotlights the versatility and musicianship of this young violinist and her ability to work well with accompanist Pamela Mia Paul. Highlights include Wieniawski’s notoriously difficult “Scherzo-Tarantelle”, Elgar’s much-loved “Salut d’amour” and the most weighty work on the disc, Brahms’ “Sonatensatz”.

This disc is the first opportunity to hear a young violinist poised to become one of the great artists of tomorrow. As Telarc President Robert Woods puts it “There is a dearth of fantastic talent in young artists today, so why does any one person stand out from another? To a great extent, it’s the preference of the listener – the person who discovers someone’s playing for the first time. When that happened for me with Shannon, I had the sense I was listening to a very old soul in a young person’s body. Shannon’s maturity was well beyond what I had heard from other young performers.”

Accompanist Pamela Mia Paul has performed with the world’s great orchestras. She has given concerts throughout the U.S., Europe and Asia, both as soloist and as chamber musician. In the studio, or in the setting of a master class, she is an internationally sought-after pedagogue whose students have participated in and won competitions including the Naumburg International Piano Competition.