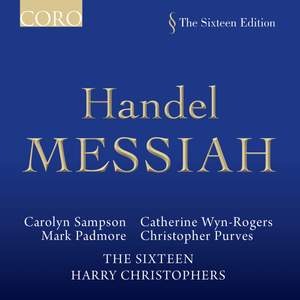 Three of the four outstanding soloists - fine Handelians all - cut their teeth in the choir, and Catherine Wyn-Rogers has been a regular soloist. Crucially they don't stand apart, regally dispensing... — BBC Music Magazine, September 2008, 5 out of 5 stars More…

Part 1, Every valley shall be exalted (Air, Tenor)

Part 1, And the glory of the Lord shall be revealed (Chorus)

Part 1, And He shall purify (Chorus)

Part 1, For behold, darkness shall cover the earth (Accompagnato, Bass)

Part 1, The people that walked in darkness (Air, Bass)

Part 1, For unto us a child is born (Chorus)

Part 1, There were shepherds abiding in the field (Recitative, Soprano)

Part 1, And lo, the angel of the Lord came upon them (Accompagnato, Soprano)

Part 1, And the angel said unto them: Fear not (Recitative, Soprano)

Part 1, And suddenly there was with the angel (Accompagnato, Soprano)

Part 1, Glory to God in the highest (Chorus)

Part 1, Then shall the eyes of the blind be opened (Recitative, Alto)

Part 1, He shall feed His flock like a shepherd (Air, Alto and Soprano)

Part 1, His yoke is easy and His burthen is light (Chorus)

Part 2, He was despised and rejected of men (Air, Alto)

Part 2, And with His stripes we are healed (Chorus)

Part 2, All we like sheep have gone astray (Chorus)

Part 2, All they that see Him laugh Him (Accompagnato, Tenor)

Part 2, He trusted in God that He would deliver Him (Chorus)

Part 2, Behold and see if there be any sorrow (Arioso, Tenor)

Part 2, He was cut off out of the land of the living (Accompagnato, Tenor)

Part 2, But Thou didst not leave His soul in hell (Air, Tenor)

Part 2, Unto which of the angels said He at any time (Recitative, Tenor)

Part 2, Let all the angels of God worship Him (Chorus)

Part 2, How beautiful are the feet of them (Air, Soprano)

Part 2, Their sound is gone out into all lands (Chorus)

Part 2, Why do the nations so furiously rage together? (Air, Bass)

Part 2, He that dwelleth in heaven shall laugh them to scorn (Recitative, Tenor)

Part 2, Thou shalt break them with a rod of iron (Air, Tenor)

Part 3, I know that my redeemer liveth (Air, Soprano)

Part 3, Behold, I tell you a mystery (Accompagnato, Bass)

Part 3, Then shall be bought to pass (Recitative, alto)

Part 3, But thanks be to God (Chorus)

Part 3, Worthy is the Lamb that was slain (Chorus)

Handel: Arrival of the Queen of Sheba (from Solomon)

Recording of the Week,  Beautiful Messiah and Exquisite Morales

Harry Christophers and The Sixteen offer a Messiah of ‘formidable achievement’, whilst The Brabant Ensemble present a compelling programme motets and lamentations by the Spanish Renaissance composer Cristóbal de Morales.

Hot on the heels of their landmark appearance on BBC Four’s Sacred Music programme Harry Christophers and his award-winning ensemble The Sixteen are releasing a brand new recording of Handel’s Messiah. On this disc The Sixteen and Harry Christophers are joined by four soloists, all revered Handelians who have had a long association with the choir - Carolyn Sampson, Catherine Wyn-Rogers, Mark Padmore and Christopher Purves. Indeed, Carolyn, Mark and Christopher all sung as members of the choir before embarking on successful solo careers.

The Sixteen has performed Messiah over 150 times and over the years the two have become synonymous with one another. Arguably the most famous oratorio ever written and certainly Handel’s best known work, Messiah needs little introduction. Composed in a staggering 24 days, Messiah was first performed in Dublin in 1742 where it received a rapturous welcome.

Harry Christophers first conducted Messiah in 1985 and has been celebrated by audience and critics alike for his gripping and inventive interpretations ever since. Over the years ‘The Sixteen’s Messiah’ has become almost legendary with audiences flocking to performances year after year and, of course, Harry’s interpretation of this great masterpiece has changed and developed.

This exceptional new recording demonstrates an accomplished expertise, honed over the past 23 years.

Three of the four outstanding soloists - fine Handelians all - cut their teeth in the choir, and Catherine Wyn-Rogers has been a regular soloist. Crucially they don't stand apart, regally dispensing arias between familiar chorus; pre-eminently this is an 'ensemble' Messiah with everything (including the superb instrumental playing and imaginatively realised continuo) directed towards the unfolding of an involving theological narrative.

Over the past few decades Harry Christophers and The Sixteen have performed Messiah about 150 times. This new Coro recording presents them to better advantage than their uneven 1987 version for Hyperion: the choir remains excellent 21 years later but the orchestra and soloists are a vast improvement. Only one member of the choir and two orchestral players repeat their roles in the 2008 performance, and the violin section has swelled from seven to 12, which helps to produce a stronger theatrical sound. Christophers's interpretation nowadays is just over four minutes longer than it was in 1987, so there are no radical changes in his overall pacing, but taking a few things a notch slower suggests an increased confidence and maturity.
The contribution from the oboes is more telling and to the fore than one usually hears, although the prominence of the organ as a continuo instrument is seldom convincing (nor is the use of theorbo accompaniment in recitatives).
The Sixteen's choral singing has clarity, balance, shapely moulding of contrapuntal lines and plenty of unforced power. When necessary, resonant homophonic grandeur is achieved without pomposity. The contrast between the playful and solemn parts of 'All we like sheep' is wondrously realised, and the soft sections of 'Since by man came death' are breathtaking.
Three of the soloists earned their spurs as members of The Sixteen. Mark Padmore, a choir member in 1987 and here making his third (and best) Messiah recording as a soloist, could be a little lighter in 'Comfort ye', but his evangelical communication of words is highly effective in 'Thy rebuke hath broken his heart'. Carolyn Sampson and the orchestra's violins relish an equal dialogue in 'Rejoice greatly', and her coloratura sparkles with clarity and assurance.
Christopher Purves sings 'For behold, darkness shall cover the earth' more softly than one usually hears, and 'The trumpet shall sound' is lyrical and suave (with splendid obbligato from Robert Farley).
Christophers conducts with finesse and integrity. This fine team performance is a safe recommendation for anyone wanting to acquire an all-purpose 'period' Messiah.

The Sixteen's choral singing has clarity, balance, shapely moulding of contrapuntal lines and plenty of unforced power. This fine team performance is a safe recommendation for anyone wanting to acquire an all-purpose "period" Messiah.

a Messiah of splendid vitality and authority, a summation of Christophers’s and The Sixteen’s Handelian enterprise.

The tempos are generally slightly faster than on the earlier recording but it is the quality of sound which stands it apart. The choruses are all perfectly balanced...a formidable achievement.

Harry Christophers thinks he has conducted the work more often than any living Handelian and it shows in this lush, refined, meticulous reading, with superb soloists

Smoothly yet energetically planed on the period instruments of the Sixteen orchestra and impeccably refined chorus, the text is lovingly caressed rather than ebulliently dramatised. The Hallelujah chorus is no rambunctious run, Part II's “lift up your heads” didactic rather than celebratory. Floating over the top are Carolyn Sampson's porcelain soprano, and the alto Catherine Wyn Rogers, whose He was Despised acquaints us with grief indeed.