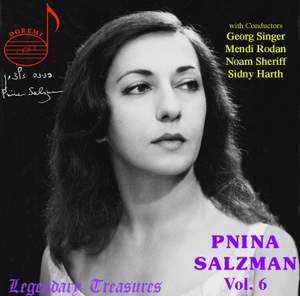 Pnina Salzman has been considered the First Lady of the piano in Israel. Born in Tel Aviv in 1924, she began playing the piano soon after she learned to walk and began performing in public at eight. Alfred Cortot, while on tour in Israel in 1932, heard her and invited her to study in Paris under his personal supervision. In Paris, Pnina Salzman studied with Magda Tagliaferro at the Conservatoire National de Musique, where she won the Prix de Piano at age 14. About the same time, Bronislav Huberman (The famous violinist, founder of the Israel Philharmonic Orchestra), who attended one of her concerts in Paris, announced that it was a "once in a lifetime experience to meet such talent", and recommended that she be engaged as a soloist with the Israel Philharmonic. Pnina Salzman was invited to play three piano concertos (in one evening) with the orchestra. This marked the beginning of a long association with the IPO. Besides her many performances with them in Israel, she was chosen to be a featured soloist in two of their world tours, conducted by Carlo Maria Giulini and by Josef Krips. Pnina Salzman has subsequently toured all five continents several times , playing with major orchestras under such conductors as Georg Solti, Carlo Maria Giulini, Erich Leinsdorf, Antal Dorati, Paul Paray, Malcolm Sargent, Igor Markevitch, Charles Munch, Jascha Horenstein, Zubin Mehta, Josef Krips, Colin Davis, Walter Susskind, Andrew Davis, Neville Marriner, Hans Vonk; Anatole Fistoulari, Sergiu Comissiona, Lawrence Foster, Michael Taube, George Singer , Gary Bertini, David Shallon, Moshe Atzmon, Mendi Rodan, Paul Ben-Haim and Noam Sheriff . In 1963 she was the first Israeli invited to play in the USSR and in 1994, the first Israeli pianist invited to play in China. Pnina Salzman is an enthusiastic chamber music performer, member of the Israel Piano Quartet, and a regular guest with such distinguished chamber groups as the Amadeus String Quartet. She was a Professor and the head of the piano department at Tel Aviv University and has served on the Jury of such prestigious International Piano Competitions as the Arthur Rubinstein Competition, Vladimir Horowitz Competition, as well as the Dublin, Iturbi/ Valencia, Munich, Athens, Sydney, and Seoul Competitions. Pnina Salzman died on December 16. 2006 in Tel Aviv. All items on this DOREMI set, Pnina Salzman volume 6, in which she is joined in live performances by two other great Israeli musicians - Yona Ettlinger, clarinet and Uzi Wiesel, cello and by three of Israel most respected conductors - are first release ever!