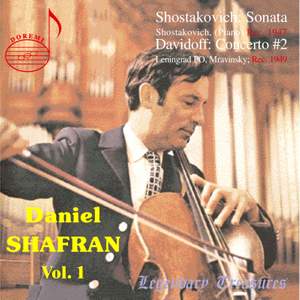 This is DOREMI's first volume of recordings and live performances by the legendary Daniel Shafran (1923-1997), one of the greatest cellists of all time. His father, Boris, who was first cellist of the Leningrad Philharmonic for thirty years, was his first teacher. He continued with Boris' own teacher, Alexander Strimer. At age 11 Daniel performed Tchaikovsky's Rococo Variations with the Leningrad Philharmonic under Albert Coates. In 1937 he won the first prize at the All-Union Competition of Violinists & Cellists. The prize was a 1630 Antonio Amati Cello which he subsequently used for the rest of his life. In 1949 he shared top honours with Rostropovich at the World Youth Festival in Budapest. In the following year he won the Hanus Vigan competition in Prague. From the 1950s Shafran concertized widely throughout Europe and the far-east, In the early 1960s he toured America as soloist with the Moscow State Orchestra, the first of three tours. In 1955 he was made Artist of Merit of the USSR. In 1959 he was elected to the International Academy of Artists in Rome and in 1971 he was named ''People's Artist of the USSR''. Throughout his career, he recorded extensively, taught, and served on competition juries. Shafran's playing was unique. His sonority had a special quality that distinguished him from all other cellists. The ''Abend Zeitung'' described it as ''blossoming...colourful, tender, melancholic and graceful''.. Most items on this volume are first time on CD. This CD contains a rare recording made in 1946 of Shostakovich's cello sonata, in which Shafran is teamed up with Shostakovich (at the piano).