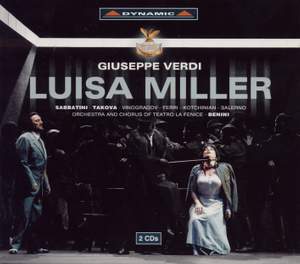 Luisa Miller is an opera that abounds in splendid moments of music and one that occupies a central role in the evolution of Verdi’s dramaturgy. The opera was staged on the evening of

8th December 1849. The performance was a resounding success and the opera continued to affirm itself in further performances. This cd plays the last production staged at Teatro La

with bold strokes, in a manner that anticipates the great heroines of the popular trilogy. Rodolfo, here interpreted by Roberto Sabbatini, has a very difficult mid-high tessitura and the classical

boldness of the tenor is accompanied by openly elegiac accents that had rarely before been heard in the tenor roles created by Verdi.