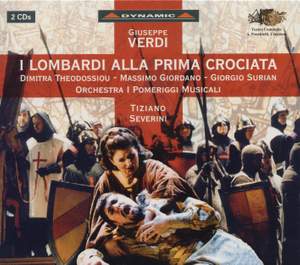 Act I Scene 3: A te nell'ora infausta (Chorus of Nuns)

I Lombardi was born in the wake of Nabucco, with the openly declared intention of following on its success: same librettist, Temistocle Solera, same choral subject of religious imprint with patriotic overtones. Not less important for the success of this work was the choice of a subject of Lombard, better yet Milanese, setting. This is a choral opera in which one finds also beautiful solo passages.

The cast of this November 2001 live recording, under the baton of Tiziano Severini, is lead by the soprano Dimitra Theodossiou (the fine interpreter of Anna Bolena, Stiffelio and Attila) and by the famous bass Giorgio Surian.