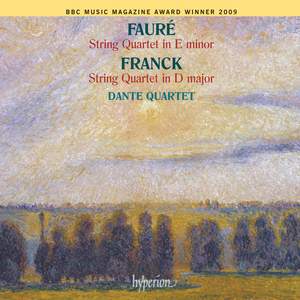 The Dante Quartet are superb advocates, especially in the Franck, where they are without peer among modern accounts. — BBC Music Magazine, August 2008, 5 out of 5 stars More…

The great French composers Fauré and Franck have generally been cast as total opposites, but in fact they had much in common. Neither were really men of the theatre, nor were they natural symphonists, nor were they flashy orchestrators in the Berlioz or Rimsky-Korsakov tradition. But both cultivated what the French call ‘intériorité’, which one could translate as ‘intimacy’, though this loses the sense of deep reflection, even of transcendence, immanent in the French term. Finally, as it turned out, the last works of both were string quartets. Recorded together here, these beautiful final works demonstrate a thorough maturity of spirit and talent in both composers.

Franck’s quartet breaks new ground, particularly in the complex structure of the first movement. The discourse is also shot through with sudden silences, as though questioning the propriety of the whole enterprise—silences whose force was surely not lost on the young Debussy, who a few years later was to claim silence as one of his most fruitful discoveries. The String Quartet in E minor by Fauré is almost backward-looking in its modal tonality, and a model of ‘intériorité’.

Winner of the prestigious Royal Philharmonic Society Award for Chamber Music in 2007, the Dante Quartet is known for its imaginative programming and the emotional intensity of its performances. The group was founded in 1995 at the International Musicians’ Seminar at Prussia Cove, Cornwall. This is its first recording for Hyperion.

The Dante Quartet are superb advocates, especially in the Franck, where they are without peer among modern accounts.

Two swansongs, and in each case it's the composer's only string quartet. But how different these works are – the Franck overflowing with invention, drama and passion, while Fauré's sparer textures and unchanging motion leave an impression of reflective melancholy. Roger Nichols's excellent notes point out, though, how the music of both composers has the quality of intériorité, of intimacy and self-examination.
This is a notably well-recorded disc; we're placed, it seems, right in the middle of the music-making, and from the opening bars of the Franck we feel the intensity of the Dante's commitment.
You may consider that their intense approach, with powerful vibrato and bow pressure applied even to the voices filling out the harmony, tends to become rather wearing. The Dante performance is still a fine one, by turns vigorous and tender, and with impressive variety of expression.
In the Fauré there's a nice ebb and flow of feeling as the music progresses – in a leisurely way in the Andante, more purposeful in the outer movements. Others may have come closer to the heart of this elusive music, but you may prefer the Dante's more earthy approach.
It's certainly playing of great accomplishment.

…from the opening bars of the Franck we feel the intensity of the Dante's commitment. In the Fauré there's a nice ebb and flow of feeling as the music progresses… It's certainly playing of great accomplishment.

This is a wonderfully played pairing of perhaps the two greatest of all French string quartets. It is a measure of the outstanding quality of the Dante Quartet that both works are projected as vividly and immediately as they are. There's such a passionate involvement about their playing, such belief in the music's outstanding qualities, which not only makes light of the structural challenges of the Franck, but treats the rarefied world of the Faure as if it were the most naturally expressive thing imaginable. It's an outstanding disc.

The Dante is one of those rare quartets where you can sense the personalities of the individual players as much as appreciate the common bond that ties their interpretations together. The players cut through some of the outward seriousness of Franck's D major Quartet to find the warmth within, as well as the wit in its Mendelssohnian scherzo. Fauré's late E minor Quartet is tackled with equal attention to expressive detail and subtleties of tone colour.

No dithering with the Dante Quartet in their Hyperion debut: they plunge into whatever they play with passion, energy and communal spirit. These two late quartets from Fauré and Franck make a canny coupling. The Franck dazzles with its boisterous invention; the Fauré cools brows with its thoughtful restraint. To both the players bring the same expertise and vast colour range. And the recording’s superb. If you like the repertoire, don’t hesitate.