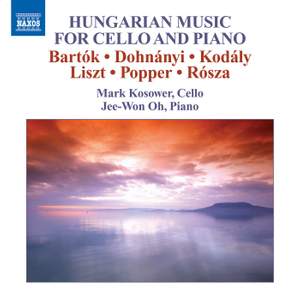 Hungarian Music for Cello and Piano

Bartók: Rhapsody No. 1, BB 94c (version for cello and piano)

This anthology of Hungarian music for cello and piano ranges widely from Liszt’s haunting The Nonnenwerth Cloisters and two salon pieces by the great 19th century cello virtuoso Popper, to composers of the 20th century. Bartók’s First Rhapsody is an original folk-song arrangement intended to popularise the composer’s music as part of a lighter genre. Dohnányi’s Sonata in B flat, Op. 8, for cello and piano, is a formidable work in four movements written in the tradition of the great Romantic sonata. Rósza’s Toccata capricciosa, a fantasy on Hungarian themes, is a virtuosic tour-de-force for solo cello.