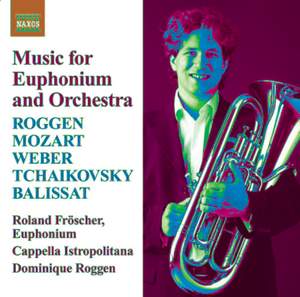 Offer, Music for Euphonium and Orchestra

The euphonium is said to have been invented in Weimar in 1843. In German and Russian military bands it came to replace the bassoon, suggesting that transcriptions of works for bassoon should make an interesting and useful addition to euphonium solo repertoire. This recording includes two original works for euphonium, and transcriptions of bassoon concertos by Mozart and Weber, with an effective transcription of Tchaikovsky’s Andante cantabile. Roland Fröscher, who plays exclusively on a YORK Eminence Euphonium, and the Windcorp Brass Band won the Swedish Brass Band Master 2007 title in the competition’s top performance class.