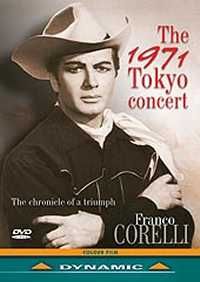 Giordano, U: Un dì, all' azzurro spazio (from Andrea Chénier)

The Italian tenor Franco Corelli was born in Ancona on 8th April 1921. In his long artistic career 1971 (the year of the recordings featured in the present DVD) was an important one. The tenor, who was famous all over the world, turned fifty; twenty years of his life had been spent on stage. Few opera singers, in the 20th century, could compare with him for passion, variety of repertoire and quality of interpretation. In 1971 Corelli sang at the Metropolitan in Ernani, Lucia di Lammermoor, Andrea Chénier, Bohème and Werther. That intense year saw him also visit the Far East with a triumphant series of recitals (Tokyo, Osaka and Seoul), the first of which is documented in the present DVD. The year ended with a successful Norma in Parma (with Cristina Deutekom) and equally glorious appearances in Forza del Destino, Ernani, Aida and Roméo et Juliette. This wonderful recital comes at the conclusion of a fabulous career, in which the Italian tenor sang side by side with all the greatest protagonists of the operatic world. The Tokyo concert, with the Japanese audience in raptures and a Corelli in great form, is the chronicle of a veritable triumph.