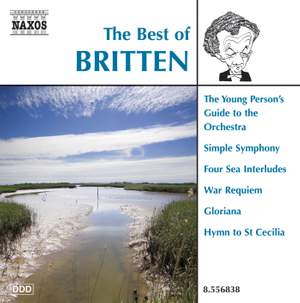 The Best of Britten

Britten: Suite on English Folk Tunes 'A Time there was', Op. 90

Excerpt,  Britten: Variations on a theme of Frank Bridge, Op. 10

Variations on a Theme of Frank Bridge, Op. 10: Variation 10: Fugue and Finale

Britten: Tell me the truth about love (from Cabaret Songs)

The outstanding English composer working in the mid-20th century, Benjamin Britten won a significant international reputation, whilst remaining thoroughly English in inspiration. Britten’s compositions appeal to all ages, from the delightful Simple Symphony, composed for a school orchestra, and The Young Person’s Guide to the Orchestra written for an educational film, to the haunting Serenade for Tenor, Horn and Strings and the intense anti-war statement of his War Requiem