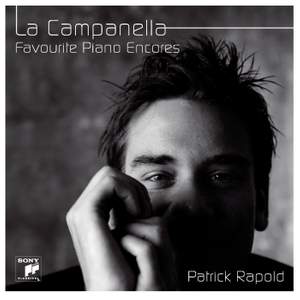 Horowitz, V: Variations on a Theme from Bizet's Carmen

Few artists manage to keep up two careers at the speed that Patrick Rapold does. Born into an actor’s family in 1975, he studied acting in Hannover and Zurich and at the European Film Actor School in Zurich. Since then, he has appeared in more than 30 films for cinema and television. As of 1996, he started giving solo concerts on the piano both at home in Switzerland and abroad.

On La Campanella, his first album for Sony Classical, Patrick has regrouped some of the most famous piano encores in the catalogue. Bizet’s Carmen Variations and Chopin’s Prélude op. 28 No.20 along with Schubert’s Soirée de Vienne in Liszt’s adaptation of the piece, and obviously Liszt’s famous La Campanella – the title piece making this album a selection of some of the most highly esteemed Romantic piano works to date. Patrick Rapold resides in Zurich and Los Angeles.

An impressive technique, but little musical insight from a pianist / actor