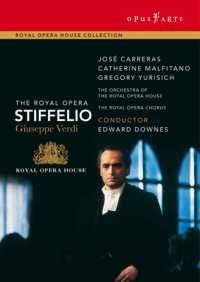 Once regarded as Verdi's lost opera because of early censorship and controversy, Stiffelio has now established its rightful place in Verdi's canon. In this 1993 recording from the Royal Opera House, Covent Garden, José Carreras, as the Protestant minister whose faith is shattered when he discovers his wife's adulterous liaison with a family friend, leads a fine cast that includes Catherine Malfitano, Gregory Yurisich, Gwynne Howell and Robin Leggate under the baton of Edward Downes.

In 2007 Stiffelio was reported sinking under the weight of a lavish production at the Metropolitan.
At Covent Garden, the production team, led by Elijah Moshinsky, had much more the right idea and, in one decision of casting, the visual element is transformed. The opera has only one female among the principals, and, rather as in Otello, the action turns on her largely passive character. She is Lina, wife of the minister of a Protestant community where the way of life is simple and biblical law is strictly upheld.
At the Met she is played by Sharon Sweet whose ample form and golden curls suggest (however unjustly) an ungodly allowance of worldly pleasure.
In her husband's absence she has 'fallen', and Catherine Malfitano (the Lina at Covent Garden) is attractive enough to make that seem plausible while remaining in figure and demeanour one of the devout, and a 'pure' woman at heart.
The other major difference in production is one of scale. At the Metropolitan everything has gone up in the world. The minister's house is palatial, the modest gathering to celebrate his return a full-scale ambassador's dinner party.
Lina's father is decked out in full military grandeur, while at Covent Garden he is clad in simple civilian dignity. Covent Garden's graveyard is a matter of plain stones and crosses; the Met's sports elaborate and (surely) abhorred images.
In every respect the London production is better, with unostentatious care taken over furnishings and each member of the chorus provided with an identity.
The Stiffelio is Carreras in what was probably the finest achievement among roles following his serious illness. Gregory Yurisich sings magnificently as the father. Gwynne Howell is a pillar of sonorous authority, and Robin Leggate, having played Cassio so often, fits in perfectly as his guilty counterpart. Edward Downes conducts with a sure and thoughtful touch.

Monday's performance was beyond any but nit-picking criticism. Downes's conducting confirmed him as one of the (if not the) world's leading Verdians - grandeur, sweep, energy, allied to extraordinary delicacy. Elijah Moshinsky's production spared us nothing in rawness and immediacy, and indeed, dramatic truth… This Stiffelio is a great event: move mountains to see it.