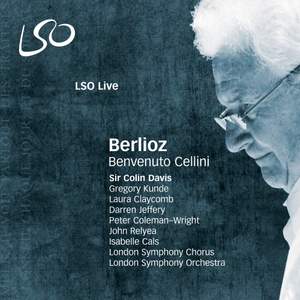 The combination of technology and the conductor's unimpaired élanmakes for glowing textures and shattering climaxes. — BBC Music Magazine, July 2008, 4 out of 5 stars More…

This title will not be issued on standard CD. A high density DSD recording (5.0), live at the Barbican, June 2007 Slimline double case & booklet in slip case with notes in English, French & German.

The combination of technology and the conductor's unimpaired élanmakes for glowing textures and shattering climaxes.

this recording outshines Davis’s version of 40 years ago in sound quality and maturity of interpretation. Berlioz’s flamboyant portrait of the Renaissance goldsmith impresses with its sheer vigour and conviction, thanks to Davis’s inspiration...a bargain.

Davis and Co give Berlioz's joyous opera all the love and vitality it deserves. In a score that grows and growls from the bottom up, Davis's Berlioz sound comes into its own, certainly weightier than Nelson or Norrington but always watchful as the melodies and cross-rhythms cascade across the barlines.

No conductor today excels Sir Colin Davis in Berlioz’s music and this performance of perhaps his most brilliant opera finds him in sparkling form. The American soprano Laura Claycomb is excellent in the coloratura role of Teresa, dominating the performance with her charm and vivaciousness.

Conductor and tenor are the joint heroes of this exhilarating release...The American tenor Gregory Kunde doesn’t have the most immediately appealing timbre, but the high tessitura holds no terrors for him, his sung French is good and, even in his early fifties, he manages to counterfeit the youthful braggadocio of Berlioz’s likeable rapscallion. Davis remains the supreme Berliozian of our day, brilliantly evoking the mercurial wit of the comic repartee, the abandoned gaiety of the Roman carnival and the high drama and suspense of the climactic scene in the foundry, for the casting of Perseus...At LSO prices, this is a steal, and anyone who doesn’t know this fabulous score should snap it up.

Compared with The Damnation of Faust, Béatrice et Benedict and The Trojans, Benvenuto Cellini has always been Berlioz's Cinderella opera, a strange mixture of farcical comedy and hymn to the supremacy of art. But Colin Davis vindicates its dramatic qualities magnificently in this recording, despite the fact that it derives from concert performances. Its success is partly down to the vibrant playing of the LSO, but also to the way the cast members seem to interact vocally as if they were on stage. And the cast itself, mainly of younger singers, is very fine indeed, led by the resolute Cellini of Gregory Kunde.

Davis is a renowned Berlioz interpreter, and this new recording, taken from live performances with the London Symphony, makes the strongest case for this fascinating work

In Davis's hands, its [the opera's] originality and imagination are fully vindicated. The cast attack the piece with skill and immense vigour. Gregory Kunde rises to the full stature of Berlioz's thinly disguised self-portrait of the artist as romantic hero. Davis's identification with the score brings out the best in his forces, allowing this neglected work to register as a masterpiece.