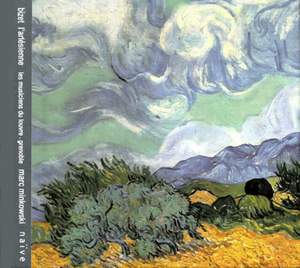 I find it hard to know what to praise most, the vivid, taut rhythms of the various marches and dances… the sensuous orchestral colours of the quieter moments, of the passion that suddenly erupts…... — BBC Music Magazine, June 2008, 5 out of 5 stars More…

Marc Minkowski, one of the most outstanding conductors of our time, has joined naïve for a long-term collaboration during which he will be surveying the music of Bach, Handel, Haydn and Mozart, among others. The first in this series of recordings features the works of Georges Bizet performed on instruments of the period. It brings an original approach to the music from two of his masterpieces, L’Arlésienne and Carmen.

I find it hard to know what to praise most, the vivid, taut rhythms of the various marches and dances… the sensuous orchestral colours of the quieter moments, of the passion that suddenly erupts… in the L'Arlésienne overture.

Couplings of the Carmen and L'Arlésienne suites have long been a favourite, and Minkowski's new disc has the best of all worlds in demonstrating a Beechamesque flair (the opening cymbal crash of the Carmen Suite is immediately arresting) and in including three suites from L'Arlésienne, their content well thought out and lovingly prepared. They consist of the familiar First Suite (as Bizet designed it), the Second, arranged after the composer's death by Ernest Guiraud, including the borrowed Menuet from La jolie fille de Perth, and a third suite of excerpts from the original score. The collection is a delight, not least because of the beautifully elegant orchestral playing.
Minkowski's choice of tempi and crisp pointing of the woodwind are admirable – in the first Entr'acte from Carmen, for instance, and the Minuet which follows. The Farandole too, is given a splendid lift by Minkowski's virtual double-dotting, while the flute solos in both Carmen and L'Arlésienne all have a delicious delicacy. There is much pleasure too, from the sensitive phrasing and the light and shade of the playing. L'Arlésienne's famous Adagietto is very affecting at the slower pacing, and it touchingly returns before the final reprise of the exuberant Farandole, heard first with men's voices and then full choir in imitation.

Minkowski has a ball with these suites, relishing their rich sonorities and glorious melodies, while at the same time investing them with a serious-minded sensitivity. The L’Arlésienne suites have rarely sounded so genuinely moving...The choral singing is splendid and the playing of Les Musiciens du Louvre alternates sparkle with delicacy of colour and feeling, while the recording and sumptuous packaging are first-class. This is now a clear first choice on virtually all counts for those wanting a disc combining music from Carmen and L'Arlésienne.

The orchestral playing is first-rate in every way, with an especially delicate contribution from the flutes...The Carmen Suite is vivaciously colourful and, throughout, the recording is of demonstration quality.

To hear Bizet played on period instruments, and in the hands of musicians steeped in the French repertoire, gives special pleasure...Iit is rare to hear the purely orchestral movements of Bizet’s operatic masterpiece delivered with such flair, colour and authentic flavour: Minkowski’s Musiciens give us a truly Mozartian approach, as the composer would have wished, to music all too often overlaid with anachronistic verismo dynamism. In the Girl from Arles music...the delicacy and brilliance of the playing evoke the unique Provençal atmosphere of Daudet’s play as vividly as the Carmen music depicts Spain. Minkowski catches to perfection the swagger and exhilaration of the famous Farandole [in both its settings]