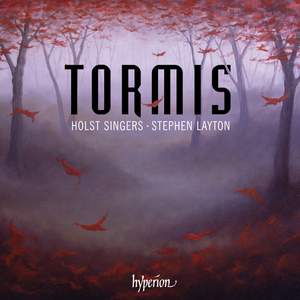 These splendid performances highlight the music's elemental aspects (not just evocations of forces of nature but the spirit of the country, long suppressed by occupiers), the Holst Singers' commitment... — BBC Music Magazine, May 2008, 4 out of 5 stars More…

I. Käsikivimäng 'The grindstone game'

I. On hilissuvi 'It is late summer'

Veljo Tormis is—along with Arvo Pärt—Estonia’s most famous living composer, holding an almost mystic status in his home country. He is also the passionate and practical torch-bearer for folk-singing revival, and the integration of an ancient cultural inheritance into thoroughly modern, post-Soviet lives. Interestingly, he trained at the Moscow conservatoire and was steeped in Soviet instruction during his early musical life. His music is almost all written for choirs; few composers have ever been so committed to one genre. Tormis’s choral specialism marks him out from Bartók, Kodály, Vaughan Williams and Grainger, whose pioneering interest in folksong was ultimately less purist given their use of the tunes alone in instrumental or orchestral works: for Tormis, the words and the music are inseparable.

These splendid performances highlight the music's elemental aspects (not just evocations of forces of nature but the spirit of the country, long suppressed by occupiers), the Holst Singers' commitment bringing out the ferocity of some passages with a quite scary intensity.

By comparison with the crack Nordic teams, the English voices are admittedly a degree softer-focused in tone and not quite so high-pressure in expression. The composer's compatriots bring even more electricity to the five marvellous songs that make up Livonian Heritage, for example, though the Holst singers find a subtlety and affection that certainly compensates.

Here the Holst Singers under the indefatigable Stephen Layton explore this fascinating legacy, a mixture of arrangements of folk songs and original music inspired by the honesty and freshness of their idiom, in performances of characteristic spirit, atmosphere and incisiveness.