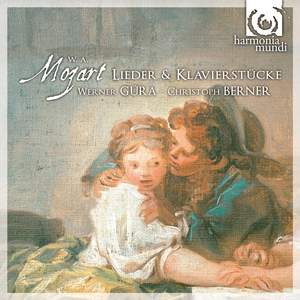 Werner Gürna makes real performance art of the slightest ditty. Christoph Berner, on his sweet-toned Streicher fortepiano, is intimately attuned to every nuance. — BBC Music Magazine, May 2008, 4 out of 5 stars

After their highly personal exploration of the Romantic lied,Werner Güra and Christoph Berner now turn to a less well-known repertoire with this selection of vocal and instrumental works. Songs for voice and piano occupied Mozart almost throughout his career as a composer. Between the first extant song, An die Freude K53, written in the autumn of 1768, and the last three completed in January 1791, there are around thirty more works in the genre, which are spread irregularly over his different creative periods.A dominant position is occupied by the year 1787, in which nearly a third of his total song output is concentrated.

The Rondo in F major K494 of June 1786 is seldom played in its original version, namely as a separate piano piece. Mozart later extended this graceful work by a few bars, changed the tempo marking, and used it in this form as the final movement of his Piano Sonata K533. Scarcely better known is the 'kleine Gigue' in G major K574.While the rondo is typical of the musical fashions of Mozart's time, the gigue harks back to the long-vanished era of Bach and Handel. In this piece Mozart goes so far as to appropriate a theme from one of Handel's harpsichord suites.Traces of Mozart's legendary skill in keyboard improvisation may be found in the Fantasia in D minor K397 (1782), which is now among his most frequently played piano works.The Six Variations in G major K180 are based on a theme from the Act II finale of Antonio Salieri's opera La fiera di Venezia, with which Mozart probably became acquainted in Vienna in the summer of 1773.

As a lieder interpreter Werner Güra gives recitals at the Wigmore Hall in London, the Amsterdam Concertgebouw, Lincoln Center in New York, the Barcelona Schubertiade and the Schubertiade Schwarzenberg.Among his successful recordings for harmonia mundi are programmes of Schubert, Schumann and Wolf - all selected as Editor's Choice by Gramophone magazine.

Werner Gürna makes real performance art of the slightest ditty. Christoph Berner, on his sweet-toned Streicher fortepiano, is intimately attuned to every nuance.