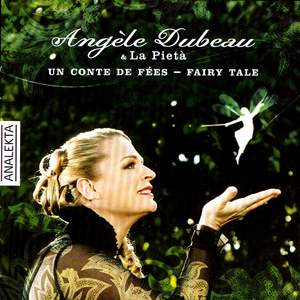 Gently and soothingly, violinist Angèle Dubeau along with her string and piano ensemble La Pietà, lead us into reverie. Enchanting melodies such as the Devil’s Beauties by Dompierre, Princesse Mononoke and Summer by Hisaishi, The Mission by Morricone, Spiegel im Spiegel by Pärt will sweep you away.

Composers adapted the magical world of the fairy tale for their own purposes. Taking inspiration from sonnets, story fragments, and human sensation, Antonio Vivaldi was a master at creating atmosphere. Music can convey anything: the vagaries of nature, a shepherd’s slumber, a meeting between two people, the birth of amorous feeling. Several centuries later, Manuel de Falla and Joaquin Rodrigo would draw upon the fertile ground of Spanish folklore, taking from it both engaging imagery and unbridled passion.

Closer to home, composers of movie music make particular use of the fairy-tale world, with its structural features such as quests, multiple setbacks and triumph over oneself. The Japanese composer Joe Hisaishi has dipped into this universe on several occasions, especially for the soundtracks of Princess Mononoke, Kikujiro and “Fragile Dream”, arranged especially for Dubeau and La Pietà. Incidentally, Angèle Dubeau is the only musician outside Japan authorized to play Hisaishi’s work, whether on stage or recorded.

Nino Rota and Ennio Morricone, giants of the genre, have composed many unforgettable soundtracks. In Quebec, François Dompierre, a master of musical colour, composed the soundtrack to L’Odyssée d’Alice Tremblay (and its excerpt “A Fairy Tale”). His work also includes the mesmerizing Les beautés du Diable, composed especially for La Pietà. Gently and serenely, Gilles Ouellet’s Berceuse pour Angèle (composed for Dubeau) and Arvo Pärt‘s Spiegel im Spiegel (Mirror in the Mirror) lead us into reverie – a land of magic wands, of dreams and of sometimes naughty children.

Angele Dubeau presents an enchanting disc of music inspired by fairy tales performed by herself and string ensemble, Ensemble La Pieta. Works include: What a Wonderful World”, “Love Theme from the Godfather”, music from Morricone’s “The Mission” and Jeanie with the Light Brown Hair”.