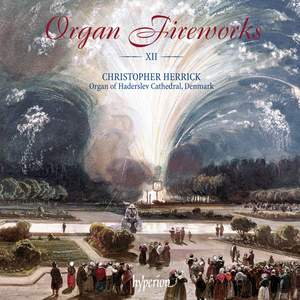 Herrick's playing is always lively and energetic, but with mixed results. Buxtehude's G minor Prelude and Fugue receives a beautifully poised and controlled account, and the works by Gade and... — Gramophone Magazine, May 2008 More…

I. Fantasia on Tonus Peregrinus

Christopher Herrick’s enduring Organ Fireworks series on Hyperion is one of the most comprehensive and popular collections of repertoire in existence. For this twelfth volume he turns to the great organ of Haderslev Cathedral in Denmark, and performs a fascinating range of works with his usual triumphal panache.

A number of these pieces have a Danish connection, including two spirited works by Buxtehude who probably grew up in Denmark, and Tre Tonestykker by Niels Wilhelm Gade, a native of Copenhagen who was admired by Mendelssohn.

The third of Dupré’s Trois Préludes et Fugues is among the best-known and most popular of his works, notwithstanding its fearful technical difficulties. The final page, in which the notes hurtle towards the magnificent final cadence, places this among the most memorable of all fugues for organ.

The Czech composer Petr Eben (1929–2007) is represented by his Hommage à Buxtehude.

Herrick's playing is always lively and energetic, but with mixed results. Buxtehude's G minor Prelude and Fugue receives a beautifully poised and controlled account, and the works by Gade and Rheinberger have a warm, seamless flow.

The unfailingly superb Christopher Herrick … this instrument is just right for this music, and the sumptuous Hyperion sound captures it all with great clarity … these are fireworks good and proper, lit with unerring precision and vividly displayed … Herrick has come up with performances of
the two great French show-pieces which are so perfectly suited to the instrument that these wonderful performances stand as yardsticks … you have, for my money at least, the most glitteringly splendiferous set of Fireworks so far