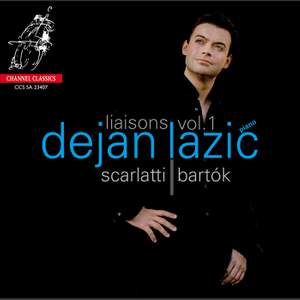 An exciting idea this…and it works! After all, Bartók greatly admired Scarlatti: he even recorded a couple of his sonatas. Both composers were innovators and combined a strong feeling for rhythm... — Gramophone Classical Music Guide, 2010 More…

I. Portrait of a girl, Andante

At first sight, they appear to have nothing in common - but disregarding the stylistic elements and a difference of two centuries, you soon recognize that both Scarlatti and Bartók, are in a sense, musical architects, who as piano virtuosos were equally interested in miniature forms and inspired by folk music.

Inspired by an 18th century performance practice, where two different character pieces were executed opposite each other in pairs in contrast with each other, I experimented in both the concert hall and the recording studio with the series of pieces on this CD. I found out quickly that I heard, experienced and played both Scarlatti and Bartók’s work ‘differently’ when they were executed alternately - as if discovering hidden secrets in familiar works! This realization led to a new and fresh perspective on the style and rubato and reconsideration of rhythmic, melodic and dynamic elements. (Dejan Lazic, liner notes)

An exciting idea this…and it works! After all, Bartók greatly admired Scarlatti: he even recorded a couple of his sonatas. Both composers were innovators and combined a strong feeling for rhythm with an audacious sense of harmony.
Dejan Lazic wastes no time in establishing his credentials as a Scarlatti player. He opens the programme with a somewhat militaristic-sounding C major piece, K420, and already it's all there – the light, resilient touch, the crisp (and often free) approach to rhythm, nimble passage- Bartók Orchestral 113 work and an obvious appreciation of subsidiary material. The last of that particular Scarlatti trio, a filigree piece in F, segues beautifully with the first of Bartók's Three Rondos on Slovak Folktunes (in C), the principal common denominator here, as so often elsewhere, the dance element.
Lazic has a very individual Bartók style; he's no literalist, as illustrated by his emphatic handling of the syncopated main motif of the last Rondo.
Again the segue from Bartók (third Rondo) to Scarlatti (the processional D major Sonata, K491) is imaginative, though the switch from the gaily skipping D major Sonata (K159) to the first of Bartók's haunting Seven Sketches is more surprising. Lazic personalises the sequence in a most compelling way. He then gently breaks their spell with Scarlatti's D minor ('Pastoral') and interestingly sandwiches a dramatic piano version (Bartók's own) of the Kossuth Funeral March between lively sonatas in F major and A minor. Perhaps the most effective segue finds the flamenco strumming of Scarlatti's K135 (E major) acting as a prelude to the first of six Dances in Bulgarian Rhythm which conclude Bartók's Mikrokosmos. Here Lazic underlines the individual character of each dance, tenderising the fourth (a tribute to Gershwin) with expressive arpeggios, and focusing the fifth's dizzying rhythmic ambiguities.
You reach the journey's end eager to start all over again – or maybe work out another Scarlatti- Bartók sequence. The potential is limitless and let's hope that that this first volume of a series called 'Liaisons' doesn't preclude a second Scarlatti-Bartók sequence.

An exciting idea this… and it works! After all, Bartók greatly admired Scarlatti: he even recorded a couple of his sonatas. Both composers were innovators and combined a strong feeling for rhythm with an audacious sense of harmony.