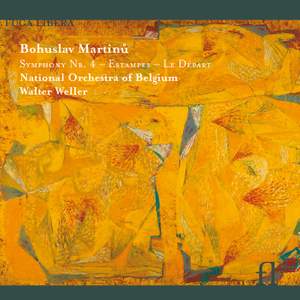 Although the orchestral works of Bohuslav Martinu are extremely seductive and skilfully written, they've remained rather confidential. Much of this neglect is due to the composer's fate: a typical 20th-century exile from wars, political and artistic upheavals.Walter Weller, however, the prestigious conductor of the Belgian National Orchestra, is fondly attached to this Czech music that accompanied him throughout his youth in Vienna. His exploration of the master's work includes a key work of Martinu's American period, the 4th Symphony, premiered in 1945 by Eugene Ormandy. It’s a late masterpiece, the very Debussy-like Estampes and The Departure, written in Paris and of which power and dazzling orchestration reminds us of Honegger's famous Pacific 231.The musicological note is by Harry Halbreich, the absolute authority on Martinu, whose works he catalogued.This record is an absolute must for lovers of great symphonic repertoire!