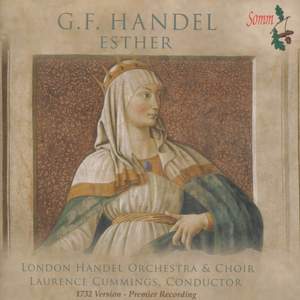 Lawrence Cummings emphasises the music's dramatic quality and generally paces it well… Rosemary Joshua in the title role sings the text as vividly as she does the notes. Christopher Purves... — BBC Music Magazine, January 2008, 3 out of 5 stars More…

Act I Scene 1: So much beauty sweetly blooming (Mordecai)

Act I Scene 1: Again shall Salem, to the skies (Mordecai)

Act I Scene 1: My heart is inditing (Chorus)

Act I Scene 1: Upon the right hand (Chorus)

Act I Scene 1: Kings shall be thy nursing fathers (Chorus)

Act I Scene 2: Let me with freedom thy petition know (Ahasuerus)

Act I Scene 3: Our souls with ardour glow (Officer)

Act I Scene 3: Shall we the God of Israel fear (Chorus)

Act I Scene 4: Jerusalem no more shall mourn (First Israelite)

Act I Scene 4: Shall we of servitude complain (Second Israelite)

Act I Scene 5: How have our sins provok'd the Lord! (Mordecai)

Act II Scene 2: Why sits that sorrow on thy brow? (Esther)

Act II Scene 3: Who dares intrude into our presence (Ahasuerus)

Act II Scene 3: I find favour in thy sight (Esther)

Act II Scene 3: How can I stay when love invites? (Esther)

Act II Scene 4: The king will listen to the royal fair (First Israelite)

Act II Scene 4: Blessed are they that fear the Lord (Chorus)

Act III Scene 1: He comes! He comes to end our woes (Chorus)

Act III Scene 2: Through the nation he shall be (Ahasuerus)

Act III Scene 2: How art thou fall'n from thy height! (Haman)

Lawrence Cummings emphasises the music's dramatic quality and generally paces it well… Rosemary Joshua in the title role sings the text as vividly as she does the notes. Christopher Purves is striking as the genocidal Haman.

This is a particularly welcome and important world-premiere recording. Handel composed Esther in about 1718-20 for James Brydges, the Earl of Carnarvon (and later Duke of Chandos), using a libretto that was anonymously adapted from Thomas Brereton's English translation of a play by Racine. This slender work, containing only six scenes, lays a strong claim to being the first English oratorio, but Handel seems not to have considered performing it for a public audience until 1732, when the entrepreneurial composer thoroughly revised the score to fit his company of Italian opera singers (including Senesino, Strada and Montagnana, who all sang in English), and enlisted the aid of the writer Samuel Humphreys to expand the drama with additional scenes. This is the historic version of Esther that launched Handel's oratorio career in London, but it has remained inexplicably neglected in modern times.
Laurence Cummings is one of our finest and most natural Handelian conductors. The Israelite Woman's sensuous opening number 'Breathe soft, ye gales' (featuring recorders, oboes, bassoons, harp, theorbo, five-part strings and organ) is neatly judged by the impressive London Handel Orchestra. The superb choir is enthusiastic and masterful, and the two inserted Coronation Anthems My heart is inditing and Zadok the Priest (the latter given a parody text) are both performed magnificently. James Bowman sounds a little fragile in the most extensive coloratura passages written for Senesino in 'Endless fame', and the part of Mordecai seems uncomfortably low for Susan Bickley (which is not helped by the dragging speed of 'Dread not, righteous Queen, the danger'), but in general the soloists form a consistently solid team.
Christopher Purves is marvellous as the scheming and bullying evil minister Haman, and is equally good at singing the pitiful and lyrical 'Turn not, O Queen, thy face away' when the villain fears his deserved doom.
The all-round excellence of this live concert performance from Handel's parish church, St George's, Hanover Square, makes it an essential treat for Handelians.

Handelians will be flocking to this one, but so should everybody. The first of two Rosemary Joshua Handel outings this month (see Semele, below) is also a world premiere. A remarkable job of musical excavation has given us Handel’s second version of Esther, the oratorio that made his name in London. An exciting, important and touching recording.

The all-round excellence of this live concert performance from Handel's parish church, St George's, Hanover Square, makes it an essential treat for Handelians.