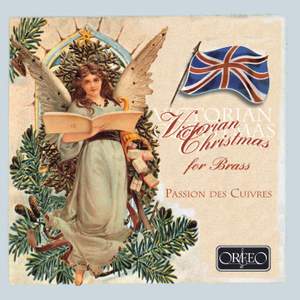 Sullivan, A: Hearken Unto Me, My People

Once in Royal David's City

Messiah, HWV 56, Part I: Aria: And He shall feed his flock

Acis and Galatea, HWV 49: O Ruddier Than the Cherry

Leontovich: Carol of the Bells

Sullivan, A: It came upon the midnight clear

Sullivan, A: Care is All Fiddle-De-Dee

The wind quintet Passion de Cuivres was formed in 2003 and has already been praised by Nikolaus Harnoncourt for its authentic use of period instruments in reviving this 200-year-old tradition of performing chamber music written for brass ensembles. In general, the music-making of Passion des Cuivres is marked by lighter timbres than those produced by modern instruments.The sound spectrum of the present CD is further extended by the soprano Constanze Backes and by the bells of St Andrew's Church, Sonning near Reading, which have been cast over a period of three centuries, their sounds guaranteeing an atmospheric beginning and end to this musical journey.

In addition to traditional carols by William Sandys (1792-1874), Lewis Henry Redner (1830-1908) and Lowell Mason (1792-1872), justice is done to the high standards of amateur groups in the 19th century by including arrangements of Baroque and Romantic choral numbers by composers as diverse as Purcell, Handel and Mendelssohn. In addition to cornets, horns and trombones, the listener will even hear an ophicleide, a kind of bass horn that was a forerunner of the euphonium.

These spirited and frequently refreshingly witty arrangements of popular and - at least outside the UK - less well-known pieces of music are designed, therefore, to warm the cockles of hearts depressed by the thought of Christmas.