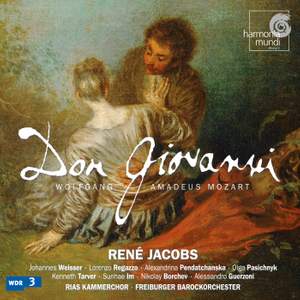 If Jacobs is hardly the first modern conductor to present the opera in its 'original colours', his Don Giovanni is among the liveliest and most enjoyable on offer. It is certainly one of the... — Gramophone Classical Music Guide, 2010 More…

Recording of the Week,  Mozart - Don Giovanni from René Jacobs

The final instalment of the Belgian conductor’s ‘refreshing and intelligent’ Mozart-Da Ponte cycle has Chris questioning his preconceptions about the eponymous libertine, sung here by 27-year-old Johannes Weisser.

If there is one thing that marks out René Jacobs’s approach to Mozart, it is the way he constantly asks himself questions – and the specifically musical brilliance of the answers he comes up with. The success of his recent version of La clemenza di Tito is proof of that! After Così fan tutte and Le nozze di Figaro, his recording of this centrepiece of the Mozart/Da Ponte trilogy offers us the latest fruits of his reflections on Classical opera. Premiered at the 2006 Innsbruck Festival and recorded shortly afterwards, this production is nourished by his thoughts on Don Giovanni as taboo-breaker and on a ‘physiology of roles’ that respects Mozart’s intentions as nearly as possible.

If Jacobs is hardly the first modern conductor to present the opera in its 'original colours', his Don Giovanni is among the liveliest and most enjoyable on offer. It is certainly one of the most brilliantly played. The Freiburg band, forwardly balanced, are eager, involved participants in the drama. Mozart's wonderful woodwind commentaries are as pungent as you will hear, while rasping, minatory valveless brass and gunfire period timpani create a properly terrifying frisson in the Commendatore's retribution scene.
Jacobs being Jacobs, there are controversial things here. Tempi can suddenly spurt forward or slow down, usually – as in the opening scene – with dramatically exciting results. Both finales hurtle forward with thrilling impetus. Elsewhere speeds can sound a shade frenetic: in the Act 1 Quartet, for instance, or in Zerlina's two arias.
As in Jacobs's Figaro, the recitatives are done in a natural, conversational style, with fortepiano and cello adding their creative 'commentaries', like the instruments in the arias.
For Jacobs, Donna Elvira is the opera's central female character. Accordingly, he casts Anna with the relatively light-toned Olga Pasichnyk, who sings 'Non mi dir' tenderly and gracefully, and sounds more sorrowful than vengeful in 'Or sai chi l'onore' – a more vulnerable and more likeable figure than usual. Conversely, Alexandrina Pendatchanska's Elvira is as hysterically obsessive as any on disc, with a mingled desperation and tragic grandeur in her big Act 2 recitative: it's an exciting performance, certainly, though her phrasing can be disconcertingly gusty.
Smooth legato is hardly a priority for Johannes Weisser either. His Giovanni is less the sinister, demonic anti-hero, more an over-sexed, heedless young bounder with a taste for danger and a penchant for cruelty. He is casually seductive with Sunhae Im's coquettish, sweet-toned Zerlina, rapier-sharp in his exchanges with Leporello, where his youthful, tenorish timbre contrasts strongly with Lorenzo Regazzo's bass-baritone.
Regazzo's is a charismatic performance, never descending to caricature; his lubricious relish in the Catalogue aria does not preclude a hint of elegance. The mellifluous-toned Kenneth Tarver makes a sympathetic, concerned Ottavio, the Masetto is aptly sullen, the Commendatore amply imposing. But few could deny the zest, sweep and sheer theatrical charge of this recording.

Regazzo's brilliant diction and timing put him in the first
rank…Pendatchanska's Elvira seemed in each of her appearances like a Fury descending not only on Giovanni, but on all the other characters too.

René Jacobs conducts a bitingly sharp account of Don Giovanni...the cast list does not sound distinguished, yet they make a superb team with no weak link, and Jacobs's speeds are sensible rather than exaggerated. The soloists all have fresh, clear, firm voices

There is much to admire...especially from the playing of the Freiburg Baroque Orchestra as primed by Jacobs's tensely dramatic phrasing and pacing…

Jacobs's recording of the 1788 Vienna version (with the discarded Prague numbers included in an appendix) is always exhilarating...I found its zest and mercurial spirit refreshing, often compelling.