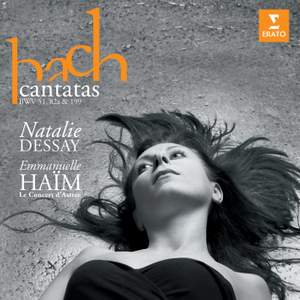 I. Jauchzet Gott in allen Landen

The programme features three of Bach’s superb Cantatas, including the great ‘Ich habe genug’, in Bach’s own arrangement for soprano, BWV 82a. The other two Cantatas are two of only four sacred cantatas that Bach wrote for solo soprano: ‘Jauchzet Gott in allen Landen (Praise God in All Lands) is one of Bach's best known cantatas, with an important part for solo trumpet, here performed by young British musician Neil Brough. Both the soprano part, which calls for a high C in the first and last movements, and the solo trumpet part, which at times trades melodic lines with the soprano on an equal basis, are extremely virtuosic. The third cantata ‘Mein Herze schwimmt im Blut’ (My Heart Swims in Blood) is one of the earliest cantatas Bach composed – its vocal part is technically demanding and contains challenges which Natalie Dessay meets with the highest artistry.