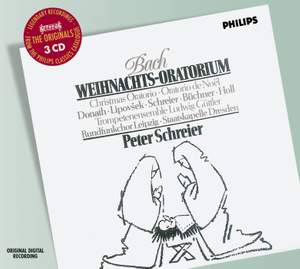 No.6 Evangelist, No.7 Choral

Peter Schreier contributes a fine, fresh version of the Christmas Oratorio, similarly taking on the double duties of conducting and singing the central part of the Evangelist. The Leipzig Radio Choir sings responsively; though modern instruments are used, Schreier consistently shows how he has been influenced by new ideas of authentic performance on period instruments. Though the scale is larger than in a period performance, the speeds are regularly fast, sprightly rather than breathless, with string articulation crisp and light ... the soloists make a strong, consistent team ... full, bright and atmospheric recording ... the layout on three CDs make this issue competitive.